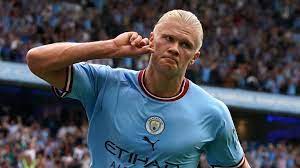 Erling Haaland is “much better” after his recent injury-enforced absence, says Pep Guardiola, with Manchester City ready to welcome him back.

The prolific Norwegian striker has sat out City’s last two games, against Leicester and Sevilla, after picking up a knock during a Champions League outing against his former employers Borussia Dortmund.

The 22-year-old, who has 22 goals to his name across all competitions this season, is now pushing to be involved in the Premier League clash with Fulham on Saturday – although it is yet to be determined how many minutes he will see in that contest.

Guardiola told reporters when asked for an update on Haaland: “He’s much better. We will decide today.

It is a good step to start training. Now we have training this afternoon and we will see. If he is good for 90 minutes or less minutes, we will see after training.”

Haaland has been a sensation for City this season, but Julian Alvarez has impressed when asked to fill the striking void and Guardiola will have no complaints at throwing the Argentine youngster in again if Haaland is considered not ready to start against the Cottagers.

City’s boss added on another of his exciting 22-year-old forwards: “He’s so young, at that age you can play every day.”

They could become the first top-flight side to win more than 10 such home games in a row since Aston Villa between December 1930 and September 1931 (13 in a row).

City enter their meeting with Fulham sat second in the table, but will hit top spot overnight at least if they are able to overcome Marco Silva’s side as current leaders Arsenal are not in action until Sunday.
(Goal)