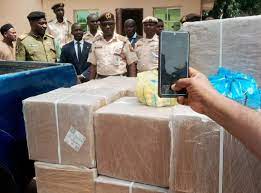 Nigerian Immigration Service (NIS), Jigawa State Command has arrested a car suspected to have carried 25 cartons of illicit drugs along the Nigeria/Niger republic border in the Birniwa Local Government Area of the state.

He explained that the patrol team succeeded in arresting one vehicle and its driver while the three other vehicles are at large.

Bagari added that 25 cartons of Predgabling capsule, knives, and a Nigerian international passport were found in the car; after investigation, the Command will hand over the suspect and the exhibit to Nigeria Drugs Law Enforcement Agency (NDLEA) for prosecution.

The State Comptroller, however, revealed that the patrol team had on the same day arrested suspected cattle rustlers in the Jahun Local Government Area of the state.

He explained that the suspect t and the cattle will be handover to police for further investigation as the owners of the cattle have already reported the matter to the State Police Command.

Mr. Bagari then reiterated the commitment of his Command to collaborate with other security agencies in securing the Nigerian border from any nefarious activities and ensure the security of life and properties in the country.