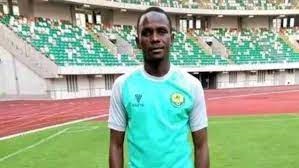 Kano Pillars Football Club has expressed its sadness and shock over the death of its former striker, Bello Musa Kofar-Mata who died on Tuesday 1/11/2022 after a brief illness.

The Secretary of the Club, Abbati Sabo Abba disclosed in a condolence message to the family of the deceased which he signed on behalf of the Acting Chairman of the Club, Alhaji Ibrahim Galadima.

Abba described the late Bello Musa Kofar-Mata as a committed player who set history with Kano Pillars football club and made the people of Kano state and the entire teeming fans of the club proud by winning the 2007/2008 Npfl season.

He extended the heartfelt condolences of the Acting Chairman, Management, Players, and the Technical Crew of the club to the family and friends of the deceased.

The Secretary then prayed to the Almighty Allah to forgive the player of his shortcomings and grant him eternal rest in Jannatil Firdausi, and also give his family the fortitude to bear the great loss.