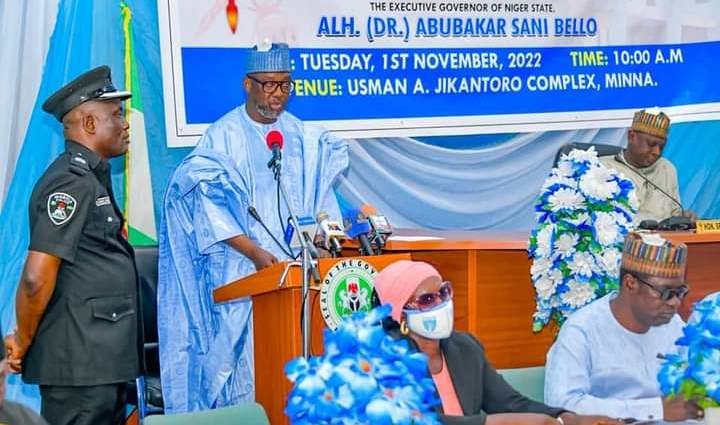 This is contained in a statement signed, Tuesday, by the Chief Press Secretary to Governor Mary Noel-Berje.

According to the statement, in what apparently is the last budget presentation by the administration, the Governor disclosed that the Fiscal Estimate is designed to consolidate its past achievements in moving the state forward and called on the incoming administration to seriously explore the abundant opportunities available in agriculture, tourism, and mineral resources to boost the state’s internal revenue.

While emphasizing the need to look inward to grow the state’s economy, he reiterated the necessity for the review of its Internally Generated Revenue (IGR) stressing that attention would be given to infrastructural development to attract private sector investment to enhance earnings.

The Governor stated that the administration will continue to support farmers and boost agricultural productivity in view of the sector’s obvious, strategic importance as the major occupation of the state’s teeming population and the backbone of its economy.

“We will intensify efforts to complete the Bobi Grazing Reserve and revamp others.

“As a potential source of revenue, the state government will continue to solicit the support of appropriate federal government agencies and private investors to develop our tourism potential.

“We will also encourage solid minerals development in order to diversify the state’s economy”, he added.

He revealed that the state government would, in the 2023 fiscal year, prioritize the completion of the numerous road projects that have attained 80-90% completion level as well as conclude those already initiated while directing contractors to resume back to their respective sites immediately.

The Governor appreciated the Speaker and other members of the State Assembly as well as the Judiciary for their continued cooperation with the executive arm in an effort to collectively improve the quality of life of the people of the state.

He also expressed gratitude to all Nigerlites for their abiding faith in his administration.

In his remarks, the Speaker, Niger State House of Assembly, Abdullahi Bawa Wuse commended the executive arm for the presentation of the 2023 Budget Estimate and assured of the commitment to ensure quick passage of the appropriation bill.

The Speaker also promised to collectively work with the executive and relevant Agencies to vigorously improve on the Internally Generated Revenue of the state for the betterment of all.

Humanitarian Minister Signs Save the Children International to Monitor NSIP