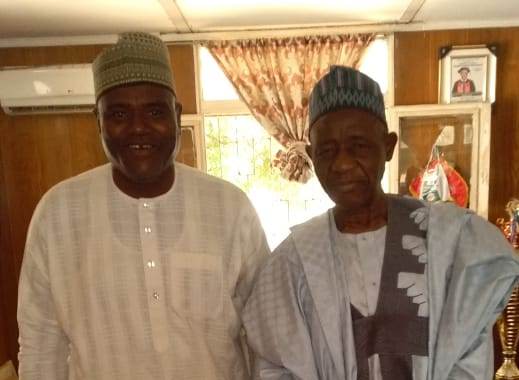 President of Nigeria Football Federation, Alhaji Ibrahim Musa Gusau has paid a congratulatory visit to the Chairman of the Kano state sports Commission, Alhaji Ibrahim Galadima over his investiture with an Honorary Doctorate Degree in Sports Management courtesy of the El-Roy University of England.

Alhaji Ibrahim Gusau described the former President of the then Nigerian Football Association (NFA) as a man of proven integrity, honesty, and dedication to duty and likewise a father in the field to one and all

On his part, the Awardee, Alhaji Ibrahim Galadima, thanks the New NFF president Alhaji Ibrahim Gusau and his entourage for the visit describing it as a mark of respect and honor.

Alhaji Ibrahim Galadima who is the acting   Chairman of the Kano Pillars football team used the medium to call on the NFF Boss to do his utmost in moving the round leather game forward.