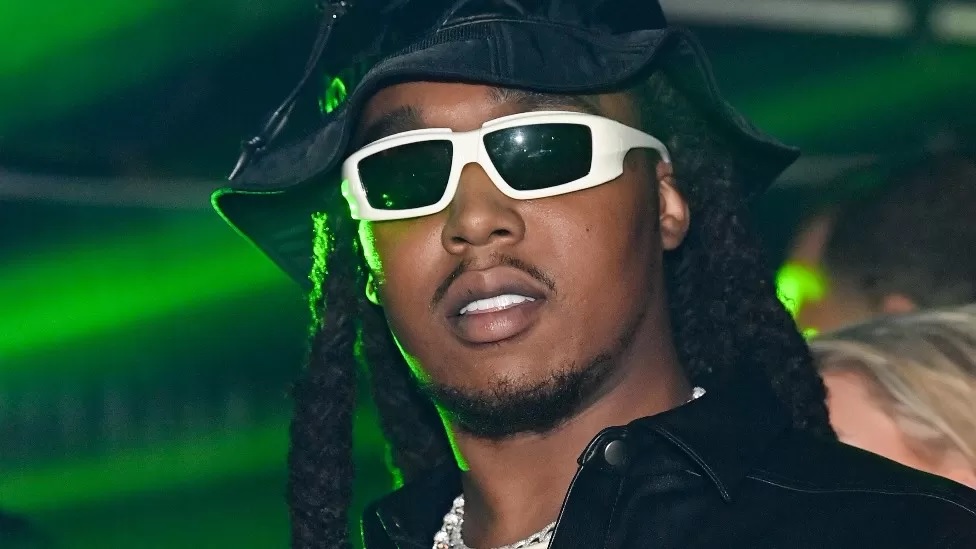 US rapper Takeoff, from the chart-topping group Migos, has been shot dead at the age of 28 in Houston, Texas.

The star was killed at a bowling alley where he was playing dice with his uncle and bandmate, Quavo, on Tuesday.

A representative for the musician, real name Kirshnik Khari Ball, confirmed the news to the Associated Press.

Migos were one of the most influential groups of their generation, pioneering a style of rapping in choppy, staccato triplets known as the “Migos flow”.

The band, who split earlier this year, scored several international hits including Bad and Boujee, Versace and Walk It Talk It.

Police said 40 to 50 guests had been at a private party when someone opened fire. Security guards in the area heard the shots but did not see who fired the gun.

When they arrived, officers said they found a large crowd and a man in his twenties with a gunshot wound to the head or neck. He was pronounced dead at the scene.

Takeoff was identified as the victim by media outlets including TMZ, Variety and the Hollywood Reporter.

However, police told the BBC they would not officially confirm an identity until the victim’s family had been notified.

Reports that Quavo was also injured in the incident have not been confirmed. Police said two other injured victims were driven to hospital in private vehicles.

There was “a sense of peacefulness about his aura”, Mr Findling said, adding: “The world was starting to learn about Takeoff. It was his time to shine.”

Tributes have been posted on social media. “Forever a legend, I can’t believe this,” wrote Lil Pump on Instagram; while Ja Rule posted an emoji of a dove and sent “love to friends and family”.

Music executive Cole Bennett tweeted that “nothing makes sense anymore. nothing at all”; and Juice Wayne posted a verse about Takeoff, saying “it will never make sense”,

“Takeoff [was] probably the most unproblematic rapper,” added actress Masika Kalysha. “He don’t bother nobody and stay out the way.”

Pioneers
Migos – made up of Takeoff, Offset and Quavo – grew up together in Lawrenceville, Georgia, and came to represent the state’s capital, Atlanta, arguably the spiritual home of trap music.

Takeoff said music had offered the band, who were all related, an escape route from poverty.

“Growing up, I was trying to make it in music. I was grinding, which is just what I loved doing. I didn’t have nothing else to do,” he told The Fader.

“In my spare time, I’d record myself. Find a beat… just making something and creating for me. I’d wait for Quavo to get back from football practice and I’d play my songs for him.”

Originally called Polo Club, the band made their debut as Migos in 2010, and scored their first hit with Versace, which received a remix from Drake, in 2013.

‘The Beatles of this generation’
Their ascent halted briefly in 2015 when Offset was sent to jail following a police raid on the group’s tour bus after a show at Georgia State University.

Later that year, the trio issued the mixtape Back to the Bando, which included the hit song Look at My Dab – which popularised the dabbing dance trend that was later picked up by athletes and even politicians.

A slow-burning success, it topped the US charts two months after it was released, thanks partly to an enthusiastic endorsement from actor-rapper Donald Glover, aka Childish Gambino.

“I think they [Migos] are the Beatles of this generation,” he said during a speech at the Golden Globe Awards in 2017. “That song, Bad and Boujee, is just fly.”

Takeoff’s non-appearance on that single caused a minor controversy among fans – but he brushed it off, claiming he was simply unavailable for the recording session.

Propelled by its success, the band’s second album, Culture, debuted at number one in the US. The same year, the group collaborated with Calvin Harris on Slide – their only UK top 10 hit.

Their follow-up album, Culture II, featured production by Kanye West and Pharrell Williams, as well as guest spots from Nicki Minaj, 21 Savage, Cardi B and Drake. Another US number one, it spawned the platinum hits MotorSport, Stir Fry, Walk It Talk It and Narcos.

Around the same time, Offset began dating Cardi B, with whom he now has two children, Kulture and Wave.

Takeoff was the youngest member of the band and often the quietest in public.

“He analyse a lot, that’s why I think his raps be so strong,” Offset told Rolling Stone in 2018. “He’s just powerful.”

The musician released a solo album, The Last Rocket, in 2018 before Migos reunited to record Culture III in 2021.

However, the band split up earlier this year after a disagreement with Offset.

“We stand on real deal loyalty, and sometimes that… ain’t displayed,” Quavo told the Big Facts podcast earlier this year. “This ain’t got nothing to do with no label, no paperwork, no QC, nothing. This got something to do with the three brothers.”

Takeoff and Quavo continued as a duo, releasing an album, Only Built For Infinity Links, which reached number seven in the US charts last month.

Shortly before Takeoff’s death, the pair had released a Halloween-themed video for their single Messy.
(BBC)