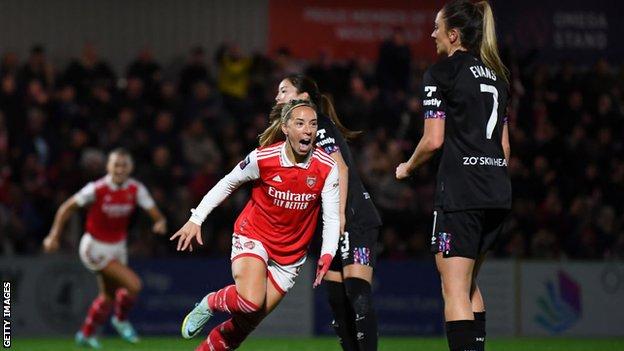 Arsenal midfielder Jordan Nobbs said she was “glad to take her chance” after a “rough few years” with her goal in their victory over West Ham.

The Gunners came from behind to beat West Ham 3-1 and set a new Women’s Super League record of 13 successive wins.

Nobbs scored within two minutes of coming off the bench to equalise for Arsenal before goals from Stina Blackstenius and Frida Maanum sealed victory.

England midfielder Nobbs has struggled with injuries in recent years which forced her to miss the World Cup in 2019 and the Lionesses’ triumph at Euro 2022.

She has had to bide her time for minutes at Arsenal with competition for places in midfield but Nobbs now has two goals in four days after her strike against Zurich in the Champions League on Thursday.

“Every one of us on the bench has been working so hard in training,” Nobbs told Sky Sports.

“It’s a credit to the mentality. We’ve had so many games but we know those moments will come to get game time.

“I’ve had a rough few years [with injuries]. We have such a talented squad and in the last few months I’ve just had to work really hard. That chance always comes and I’m glad I could take mine.”

It was a deserved win in the end for Arsenal and they keep pace with leaders Manchester United, who recorded a 3-0 victory against Everton earlier on Sunday.

However, West Ham put in a strong performance and should have been two goals ahead before Nobbs scored Arsenal’s first shortly before half-time.

Nobbs’ equaliser cancelled out West Ham captain Dagny Brynjarsdottir’s opener, who had earlier headed in from a corner but saw the goal wrongly ruled out after Kim Little appeared to slip.

Brynjarsdottir was frustrated by the referee’s decision to penalise her when Arsenal midfielder Little clearly slipped with no infringement in the box.

The West Ham midfielder responded minutes later though when she pounced on a series of mistakes at the back by Arsenal – poking it over the line from close range after Steph Catley’s poor back-pass bounced off the post and into Brynjarsdottir’s path.

That ended Arsenal’s record run of 10 consecutive WSL matches without conceding but Jonas Eidevall’s side showed their quality to recover and claim three points.

“Happy with the three points and our performance but we were sloppy with mistakes,” manager Eidevall told Sky Sports.

“We won because we fought our way back in and we had good substitutions. The three substitutions all added quality.”

Nobbs came on in the 40th minute, replacing Little, who was helped off by the medical staff after twisting her knee and was then put on a stretcher.

Blackstenius put Arsenal ahead in the second half, volleying in Catley’s superb free-kick delivery, before Maanum netted her third goal in as many WSL starts when she headed in Katie McCabe’s curling cross.

“We’re fortunate to have a player like Jordan [Nobbs] in the squad,” added Eidevall.

“Once again we see a player that has prepared so well. She came on with quality and that’s the difference.”

Nobbs added: “I know I need to play to get into the England squad. Sarina Wiegman makes that very clear. I just have to take chances when I can. I know I need to be playing football.”

Arsenal’s 100% record this season means they sit level on points with Manchester United and Chelsea – with the Blues having played a game extra – though they are in second place on goal difference.

West Ham drop to seventh place with three wins from their opening six matches under manager Paul Konchesky, who took over this summer.

Arsenal missed out on the WSL title by a point to Chelsea last season but they have shown their credentials as challengers again this year.

After beating Zurich on Thursday in the Women’s Champions League, Eidevall made six changes to the starting XI with Vivianne Miedema once again on the bench.

He was forced into an early change with Little’s concerning injury but Nobbs did not disappoint.

She was also on the scoresheet on Thursday and picked up a second player-of-the-match award in a row with her performance against West Ham.

Hillyerd, meanwhile, was one of several impressive performers for West Ham as she kept out Caitlin Foord and Blackstenius, before Maanum struck the post in stoppage time.

Full-back Kirsty Smith did well going forward and Brynjarsdottir caused problems all game – her late strike stopped by Manuela Zinsberger almost rebounded to Viviane Asseyi before it was punched behind by the goalkeeper in an impressive double save.

Konchesky has overseen steady progress this season and West Ham’s three defeats have all come against the league’s top three – Arsenal, United and Chelsea.

They showed plenty of threat at Meadow Park and in Brynjarsdottir, who has scored four goals in six WSL games, they have a player in terrific form.

“We started very well again and for 70 minutes were great but maybe the strength in depth in the squad shows,” said Konchesky.

“We could have had another goal but it wasn’t to be. Dagny wasn’t happy. Sometimes you get those decisions and sometimes you don’t. We didn’t get it today and it could have cost us at the end.”

Rwanda: Ebola prevention booth set up at border with Uganda