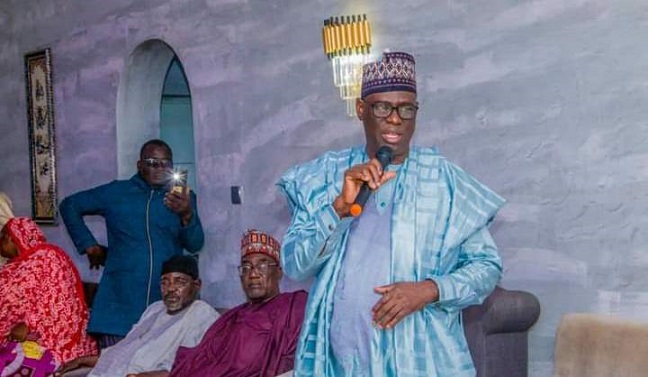 The Governorship candidate of the People’s Democratic Party (PDP) in Kebbi state, Major-General Aminu Bande(rtd) has unveiled the blueprint of his administration if elected to the electorates, saying he will reposition education, Health, Agriculture, Infrastructural development, Security, Environmental and Communication Technology, the Civil Service and Social Development for the state.

Accordingly, he said the identified priority sectors will provide the necessary stimulus for other sectors of the economy to develop, flourish and prosper.

Bande, who stated this while addressing Kebbi state elites, professionals, academics, and patriots at Safar conference hall in Birnin Kebbi, explained that if elected as the Governor he would grant autonomy to local government councils.

According to him, our administration will place a high premium on tertiary education, especially in science, technology, and all forms of functional education that will enable students to acquire skills for vocational and entrepreneurship.

“In this regard, the Kebbi State University of Science and Technology, Aliero (KSUSTA) will be given special attention.

“Agricultural development will therefore go hand in hand with rural development. Since the majority of the people of Kebbi state live in rural areas, it is imperative that this segment of our population be given the attention it deserves.

“Our government will train and empower youths on general poultry farming, chicken feeds as well as specialized areas of large scale in chickens and egg production.”

While speaking on security, he disclosed that he will take a number of proactive measures to bring peace back to the state.

He said: “I will take a number of proactive measures to checkmate these social vices. Within our party, I will step up efforts to bring about internal harmony within the various communities and tribes.

“We will make sure that we undertake regular consultations with various stakeholders and traditional institutes in order to bring peace and harmony among the various tribes and communities.

“We shall take all measures in conjunction with all the security agencies to bring an end to the current insecurity and to achieve lasting peace.”

Bande also told the participants that if elected as the Governor of the state, he will approve the recruitment of competent medical personnel to provide both curative and preventive medical services at primary, secondary, and tertiary levels of health care.

“My administration will reposition the Civil service in the state by putting an end to promotion racketeering, where some staff connives with those saddled with the responsibility of promoting staff in MDAs to get an undue promotion, especially in the LGAs and appropriately sanction the erring staff and their accomplices.

“I will raise the unenviable status of the state from the 10 most backward states to join the league of the best 5 states in Nigeria by fast-track the socioeconomic progress of Kebbi state through a resolute, judicious, and cost-effective implementation of policies and programs in the priority sectors,” he added.

Bande however urged the people of the state to give him the chance by voting massively for him as governor come 2023 general election because he has that confidence and ability that when focusing attention on the key sectors listed above there will be no doubt it will play an important role in making Kebbi state one of the five fastest growing States in the country.

Highlights of the occasion were questions and answers to the PDP Governorship candidate.