Price of Rice May Hit ₦‎50,000 Per Bag as Floods Ravage Farms 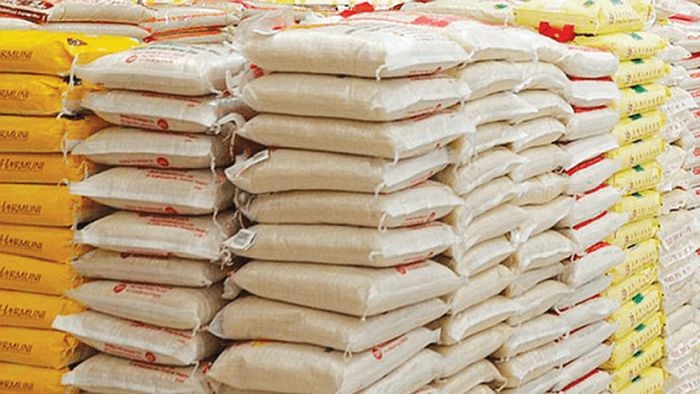 The price of a 50kg bag of locally parboiled rice may sell at N50,000 in December due to the recent flood in many states of the country; traders and distributors of the commodity have been advised buyers to brace themselves for the surge.

According to the Ministry of Humanitarian Affairs, flood incidents in Africa’s biggest economy that have destroyed 70,566 hectares of farmland, damaged 45,249 houses, and displaced over 1.4 million Nigerians, with about 600 persons reported dead, have sent prices of food items on an upward trajectory, especially in affected communities.

Rice which is a key staple mostly consumed by households, has been affected the most by the impact of the flood. The situation has caused the price of paddy to jump from N200,000 to N300,000 per tonne in three weeks.

The recent jump in paddy prices is piling more pressure on rice millers that are already contending with rising production costs amid a nearly three-fold increase in diesel cost.

A report by BusinessDay says in September, the country’s inflation hit a 17-year high at 20.7 percent, quoting the National Bureau of Statistics.

“With the rate the prices of rice are surging daily, we might even buy it at N50,000 before December,” said Ronke Adewale, a rice trader at Daleko Market in Mushin.

“Our suppliers keep adding money and attributing it to the flood and high cost of transportation,” she said.

“If you have the money, you better buy now and stock because if it persists, it will be worse in December,” she said.

Adewale Adegbenro, a Lagos-based rice distributor who buys from millers in the North, said the price of rice would exceed N50,000 by December owing to a supply shortfall caused by the floods.

Mohammed Abubakar, chairman of the Rice Processors Association of Nigeria, said the recent surge in the price of a bag of rice is a result of a combination of issues escalated by the floods.

“The recent surge in the price of a bag of rice is a result of the flooding in major producing states and a combination of other issues of high diesel and transportation costs,” Abubakar said in his response to questions from BusinessDay.

“The flood has submerged hundreds of rice farmlands and has caused the price of paddy to jump from N200, 000 to N300, 000 per tonne. It has also worsened the diesel and transportation situation in the North,” he added.

Currently, 33 out of the country’s 36 states have been ravaged by flood, and this has caused transportation costs to further surge as tankers conveying petroleum products to the northern states are unable to move as the incidents cut most road networks in the region.

A survey by BusinessDay revealed that some markets in Lagos and found that a 50kg bag of locally produced parboiled rice sells for an average of N35,000 as against N28,000 a month ago.

The country’s largest farmland of 10,000 hectares in Nasarawa owned by Olam and worth about $140 million investment has been submerged by floods, according to Ade Adefeko, vice president of external relations and stakeholder management at Olam Agri.

Owing to the current shortfall in supply, some traders of rice in Lagos – the country’s commercial center – are hoarding the commodity in anticipation of selling at a higher price, BusinessDay gathered.

Since Russia invaded Ukraine in February, the price of rice has been relatively stable amid accelerating inflation and dwindling household income. Experts attributed the price stability of the staple to an increase in local production.

Africa’s biggest economy cultivated 8.2 million metric tonnes of a rice paddy in 2020, according to the latest data from UN Food and Agricultural Organisation.

The most recent reliable figures for production come from the United States Department of Agriculture, which has projected that Nigeria’s rice production will reach five million tons in 2022, slightly above the 4.8 million tons it predicted last year.

With this production, the country will still have a deficit of two million tons with demand at 7 million tons, according to the Ministry of Agriculture.

But the gains made in the sector are currently being threatened by flooding and FX volatility as rice is among the 41 items restricted from FX by the country’s apex bank.

The Elephants in PDP and APC’s Rooms, by Hassan Gimba