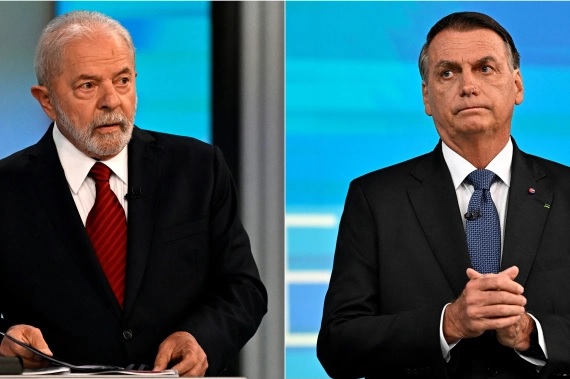 Brazil is on tenterhooks as voters are deciding if the world’s fourth-largest democracy should continue to be led by the far-right incumbent or whether to vote a left-wing former president back in.

Luiz Inácio Lula da Silva from the Workers’ Party beat President Jair Bolsonaro from the Liberal Party by five percentage points in the first round, four weeks ago.

But the run-off could be close-fought.

The winner will be sworn in in January.

President Bolsonaro cast his vote in Rio de Janeiro just minutes after the polls opened while Lula voted in his hometown of São Bernardo do Campo in São Paulo state.

Voting is electronic and results are expected within hours of the polls closing. The count can be followed live on the website of the electoral authority.

Voters from both sides of the political divide have endured an anxious four weeks since the first round.

Jair Bolsonaro won more votes than opinion polls had predicted but his main rival Lula fell short of the 50% of valid votes needed to win outright.

Five key facts about Lula
Brazil’s former President and presidential candidate Luiz Inacio Lula da Silva reacts as he holds a news conference after casting his vote during the presidential election, in Sao Bernardo do Campo, on the outskirts of Sao Paulo, Brazil October 30, 2022
77 years old
Left-wing
Former metal worker
President from 2003-2010
Imprisoned in 2018 but conviction was later thrown out
While opinion polls are predicting a narrow win for Lula, many voters say they do not trust the polls after they underestimated the strength of support for President Bolsonaro.

With the final result up in the air, the president and his rival have been courting those Brazilians who cast their first-round ballots for one of the eight other candidates who did not make it into the run-off.

Ellen Monielle is a 23-year-old student and climate activist from the city of Natal in north-east Brazil – a Lula stronghold.

Even though many of her peers pressured her to vote for Lula, she backed Leonardo Péricles four weeks ago instead.

Ms Monielle, whose mother is indigenous and whose father is black, says that she was excited to see a black man running for president and was thrilled that he chose a black woman as his running mate, adding: “I saw myself represented by them.”

But when Mr Péricles got less than 0.1% of the votes, she decided to switch her allegiance to Lula.

Rather than an endorsement of the 77-year-old Workers’ Party candidate, hers is a vote against President Bolsonaro.

“Bolsonaro represents everything that I’m not and that I don’t believe in,” she says, pointing out that the number of people going hungry in Brazil has risen under his presidency. One recent survey put it at more than 33m out of a population of about 217m.

Gustavo Ramp is equally determined, but unlike Ms Monielle, he wants to prevent ex-President Lula – who led Brazil from January 2003 to December 2010 – from returning to office.

The 31-year-old company administrator is from Curitiba, a southern city which overwhelmingly voted for President Bolsonaro.

“Under Bolsonaro, the murder rate dropped, state companies which were making losses have been making profits and public security increased,” Mr Ramp explains.

“Those are the kind of things that make me vote for Bolsonaro. There is no way I would vote for Lula.”

Mr Ramp was only 11 years old when Lula was elected president for the first time in 2002. But he says he remembers how Lula’s Workers’ Party became engulfed in massive corruption scandals in the years which followed.

Like many Brazilians who oppose Lula, he says that it would be “humiliating” for the country if Lula – who served time in prison on corruption charges before his convictions were annulled – were to be re-elected.

Mr Ramp acknowledges that Mr Bolsonaro “is not the ideal candidate”. “He has a very serious problem in that he talks too much,” he says of the president’s habit of making controversial, uncouth and homophobic statements.

Unlike many of Mr Bolsonaro’s hardcore supporters, Mr Ramp describes himself as a liberal on social issues.

He thinks abortion should be legal up until 12 weeks of pregnancy and that same-sex couples should have the same legal rights as heterosexual couples – but he says he likes the president’s tough approach to crime.
(BBC)

Arsenal return back to top after hitting Nottingham Hard