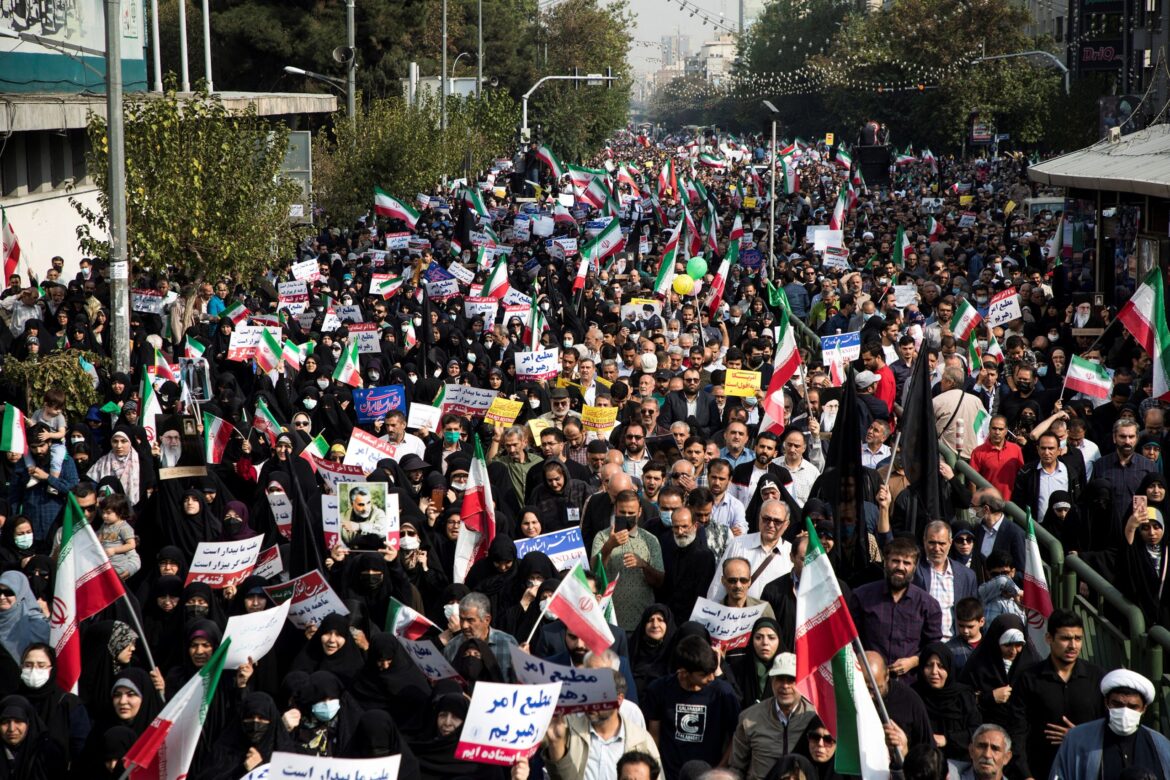 Iranians kept up protests calling for the toppling of the Islamic Republic on Friday, as activists posted videos of crowds demanding the death of the supreme leader and the widely feared Basij militia he unleashed against them.

Iran has been gripped by protests since the death of 22-year-old Kurdish woman Mahsa Amini in morality police custody last month.

They have turned into a popular revolt by furious Iranians from all layers of society, posing one of the boldest challenges to the clerical leadership since the 1979 revolution.

Video footage on social media showed protesters calling for the death of “dictator” Supreme Leader Ayatollah Ali Khamenei and the Basij, which has played a major role in the crackdown on demonstrators.

Commentary on the video said it was recorded on Friday in the city of Zahedan, close to Iran’s southeastern border with Pakistan and Afghanistan.

The activist 1500tasvir Twitter account posted the video showing demonstrators chanting “Death to Khamenei”. Another video purported to show a 12-year-old protester who was shot in the head.
On Thursday, a provincial security council dismissed Zahedan’s police chief and the head of a police station near where dozens of protesters were killed four weeks ago in the deadliest crackdown since the start of nationwide protests.

The council said the families of the victims would be compensated and a legal investigation had been opened that may lead to further measures against those who provoked the violence, “rioters” and any officials suspected of wrongdoing.

CALL FOR JUSTICE
Zahedan’s top Sunni cleric in predominantly Shi’ite Iran welcomed the move but called for an independent investigation of the killings and said any senior officials behind the crackdown should be brought to justice.

“We demand from the security council and the government that, regardless of how high in the ranks this error and crime reaches, the (guilty) official should be dismissed and brought to trial,” Molavi Abdolhamid said in a Friday prayers sermon, according to his website.

Amnesty International has said security forces killed at least 66 people in the violent crackdown on Sept. 30.

Fars news agency, seen as close to the Revolutionary Guards, blamed the violence in Zahedan on protesters.

“A number of rioters were shooting at people and security forces from rooftops during today’s disturbances… Unfortunately, a 12-year-old child was shot in the face and killed,” Fars reported.

The provincial Security Council has said armed dissidents had provoked the clashes, leading to innocent people’s deaths, but admitted “shortcomings” by police.

One person was shot dead, by “unidentified individuals” and 14 people, including security forces, were injured in Zahedan, the council said, according to state media.

Videos posted by 1500tasvir showed what it said were protests in the northwestern city of Mahabad with demonstrators running away from what appeared to be tear gas fumes, while another video showed protesters making petrol bombs.

‘ILL TREATMENT’
Iran has blamed its foreign enemies and their agents for the unrest. The Intelligence Ministry and the intelligence arm of the Revolutionary Guards on Friday accused spy agencies from the United States, Britain, Israel and Saudi Arabia of having orchestrated the unrest to destabilize the Islamic Republic.

“Precise monitoring over more than a year … and documents obtained during the recent disturbances provide much evidence of a wide role played by the American terrorist regime in designing, implementing, and maintaining the unrest,” the two security bodies said in a joint statement.

Iran’s Revolutionary Guards said its intelligence unit had foiled a bomb attack in the southern city of Shiraz, two days after a deadly shooting at a shrine there, the guards’ news agency Sepah News said.

Wednesday’s shooting, which was claimed by Islamic State, killed 15 worshippers at the Shah Cheragh shrine.

Government-organized demonstrations across the country against the Shiraz attack were broadcast live on state TV. Demonstrators waving the Iranian flag, carrying Khamenei’s photos, shouted “death to America,” “death to Israel.”

The U.N. human rights office on Friday voiced concern at Iran’s treatment of detained protesters and said authorities refused to release some of the bodies of those killed.

Rights groups have said at least 250 protesters have been killed and thousands arrested across Iran.

“We’ve seen a lot of ill treatment … but also harassment of the families of protesters,” Ravina Shamdasani, spokesperson of the Office of the High Commissioner for Human Rights, told a Geneva press briefing, citing multiple sources.

“Of particular concern is information that authorities have been moving injured protesters from hospitals to detention facilities and refusing to release the bodies of those killed to their families,” she said.

Shamdasani added that in some cases, authorities were placing conditions on the release of bodies, asking families not to hold a funeral or speak to the media. Protesters in detention were also sometimes being denied medical treatment, she said.

Iran has denied allegations by human rights groups that it abuses prisoners.
(Reuters)