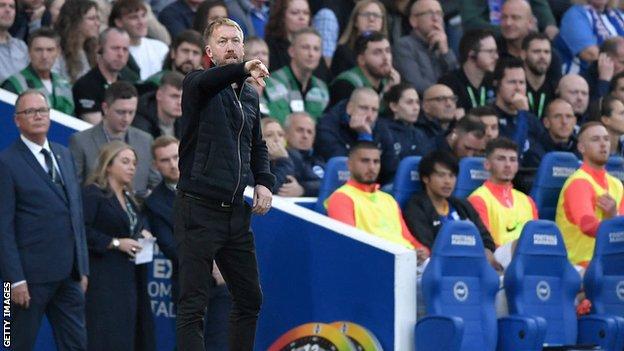 Chelsea manager Graham Potter said he has “nothing to say sorry for” after he was subjected to a hostile reception from Brighton fans before the Blues’ 4-1 Premier League defeat at Amex Stadium.

Potter led Brighton to their highest ever top-flight finish of ninth last season before leaving the Seagulls for Stamford Bridge six games into the current campaign.

The 52-year-old was booed before kick-off by the home fans, who chanted “Potter, Potter, what’s the score?” in the direction of the away dugout after Leandro Trossard’s strike and own goals from Ruben Loftus-Cheek and Trevoh Chalobah had given the hosts a comfortable half-time lead.

Asked about the Brighton supporters’ animosity, Potter said: “People are entitled to their opinions. I think I did a good job at the club and left it in a good place.

“Once the crowd were so engaged it was a difficult one for us. The scoreline is a painful one.”

Kai Havertz nodded in Conor Gallagher’s exquisite cross to give the visitors hope, but Pascal Gross capped a miserable afternoon for Potter and his players with a close-range finish after Chelsea goalkeeper Edouard Mendy parried Julio Enciso’s shot into the German’s path.

‘We have to take responsibility’
After emerging from the Amex Stadium tunnel to a chorus of boos, matters only got worse for Potter as his side produced a defensive horror show to gift Brighton a dream start.

In a chaotic opening, Trossard’s calm finish put the home side in front after Thiago Silva – who had already produced two goalline clearances to deny the Seagulls – surrendered possession cheaply in his own half.

Like Brighton’s first, the hosts’ second and third goals were entirely self-inflicted. Loftus-Cheek stuck out a knee to inadvertently steer Gallagher’s flick-on into the net via the crossbar, before Estupinan’s delivery was guided past his own keeper by the somewhat unfortunate Chalobah.

“We didn’t recover,” Potter said afterwards. “We have to take responsibility a bit for the first half. We have had a lot of football but that’s no excuse. We couldn’t quite get to that level.”

Chelsea did have chances of their own – Christian Pulisic firing wide from a promising position and Robert Sanchez tipping Gallagher’s looping header over the crossbar – but Havertz’s header early in the second half failed to spark a revival and Gross finished off an incisive counter-attack late on to rub salt into the visitors’ wounds.

“Unfortunately we missed the pass or didn’t execute it,” the Chelsea boss continued. “We didn’t take our chances and they did.

“It’s part of the process, You have to suffer and feel pain in order to grow and get better. Nobody said we’re the finished article. We have to take the pain today and learn from it.”

‘Our fans were the best player’
A run of five games without a win since Potter’s departure did not make pleasant pre-match reading for Seagulls supporters or their new coaching staff, but Chelsea were unable to cope with Brighton’s high pressing in the early stages as De Zerbi’s team threatened to run riot.

Only Glenn Murray and Neal Maupay have scored more Premier League goals for the Seagulls than in-form Trossard, whose early opener – his 25th in the league for the club – made him the first player to score a team’s first five top-flight goals under a new manager.

Had it not been for Silva’s two last-ditch clearances and a close-range Moises Caicedo effort which struck the outside of the post, Brighton could have been even further ahead by half-time.

The Seagulls’ second-half display was more measured as Chelsea sought a route back into the game, but De Zerbi’s side never looked like surrendering their healthy lead – even after Havertz’s strike.

“We must continue to play this level of football,” De Zerbi said afterwards. “We have to think only about the level of performance.

“The atmosphere was fantastic. Our fans were the best player on the pitch and it is very nice to work in Brighton. I am proud for this.”

The win is Brighton’s first in the league over Chelsea, who had won 10 and drawn four of the teams’ previous 14 meetings.