Menu
Home Opinion Between Gen. Danjuma and President Buhari: The Need to Properly Identify the Crux of the Matter
Opinion 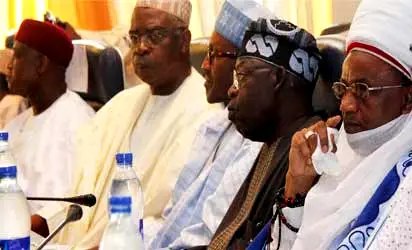 I have read and re-read the general’s recent comments at Wukari. I have also watched and re-watched the video clip he was featured.

One thing bothers me: Danjuma did not recommend any democratic way forward through the forthcoming elections for Nigerians to vote in a government of their choice that would have the capacity to properly secure them.

It doesn’t add up that a subaltern who rose to a platoon commander in the jungles of Katanga of the former Belgian Congo battling armed non-state actors would turn around as an elder statesman to recommend the arming of the same kind of militias without any underlying reason – the crux of the matter.

I beg to disagree that a one-time army chief and former Defence minister would so wantonly prescribe a solution certainly to degenerate into anarchy and chaos without just cause.

As far as this writer is concerned, Danjuma neatly camouflaged an ongoing intra-class power struggle under a renewed call for self-defense. It is now left for Nigerians to carefully read between the lines.

The verbal missiles launched from Jalingo back in 2018 and more recently from Wukari were unequivocal indictments on the incumbent Commander in Chief. They were neither sweeping generalizations nor unambiguous. Based on the principle of responsibility they were specifically targeted.

While the rest is still living history what is General Danjuma’s ultimate objective in publicly dressing down an erstwhile subordinate now the President whom he can always have unfettered access?

I shall endeavor to answer what I presume to be the reason in my conclusion.

General Danjuma and President Buhari have one indispensable relationship in common. Both are Mons-trained officers passing out in 1960 and 1962 respectively from Aldershot, United Kingdom.

Adewale Ademoyega elucidates in his book, Why We Struck (1981) on the constantly evolving political motivations of the Nigerian Army officers trained in that category.

Little wonder in service Danjuma put President Buhari under his wings because he saw in him a future army chief specifically recommending him for Nigeria’s slot at the US Army War College, a privilege not ordinarily extended to any serving Colonel back then. Check out the CVs of other generals that are Mr. President’s peers.

Mons-officers like their Sandhurst counterparts were trained by the British to dominate their environment by any means necessary. They were so conditioned barely in their early 20s by what Major Ademoyega described as the “art of the game” perhaps why Danjuma and Buhari could so easily align their interests in the ouster of Nigeria’s Second Republic in 1983.

According to Rtd. Major Al Mustapha Jokolo who served as ADC to Buhari for twenty months, “We told him (Danjuma) of our plans to overthrow Shagari and he lent us his support in the papers.” Jokolo would also add that the Israeli involvement in Umaru Dikko’s kidnap attempt from a London suburb was obtained via General Danjuma.

See details in, the Daily Sun newspaper edition of September 21, 2009.

For context on the former defense minister’s mindset, a background understudy of his life and upbringing, and a full explanation of the grey areas during the events of July 29, 1966, at Ibadan his 1979 biography entitled, Danjuma: The Making of A General by Lindsay Barrett is indispensable.

The attached picture was of the high table on May 1, 2012, at the 50th birthday lecture in honor of the pharmacist and journalist Sam Nda-Isaiah now of blessed memory, therefore, need to re-visit Sanusi Muhammad’s intervention, https://pmnewsnigeria.com/…/2023-bola-tinubu-and-the…/

Back then, as chairman of the occasion, Danjuma thundered in the presence of then-litigant Buhari still in court over the 2011 polls, “Nigeria is on fire, the North is on fire. Nigeria is becoming like Somalia. We have to sit down and face the truth, get down to the roots of our problem.”

Interestingly, the Sultan of Sokoto was present when Danjuma spoke at Wukari with the clarification that most reportage perhaps deliberately missed out, “These foreign invaders are not even Muslims. A lot of the casualties inflicted upon the land are Muslims. They are destroying mosques.”

Recall, that the Fulani emir of Muri, Abbas Njidda Tafida whose suzerainty extends over Jalingo subsequently issued a famous 30-day ultimatum in his domain which by implication vindicated Danjuma.

From rescuing Jaja Anucha Wachuku (1918-1996) Nigeria’s first Permanent Representative at the UN and later pioneer Minister for External Affairs after national independence from detention ordered by the Biafra authorities because the Ugo Ngwa had opposed the conscription of child soldiers to the commuting of death sentence on convicted coup plotters in Trinidad & Tobago as court martial chairman, Danjuma is not a power monger.

He remained loyal as General Obasanjo’s wingman in both 1976 and 1999. And he not only served as former President Jonathan’s kingmaker to be a one-time acting President through the “doctrine of national necessity” but outrightly rejected being his Vice President after President Yar’adua’s demise. He considered the offer an insult.

Against such a varied background and under the subsisting circumstances virtually across the nation, Danjuma’s silence in Jalingo and Wukari would have been resoundingly hypocritical.

The crux of the matter is, therefore, an erstwhile mentee has woefully failed his mentor as parts of Nigeria are still becoming like Somalia.

This writer’s reading of the tea leaves is that the ultimate objective of General Danjuma is to put the nation on notice against the current administration’s continuity in 2023 by any means.

A government of national unity is what the Second Republic politicians failed to achieve in 1983. It made military intervention inevitable.