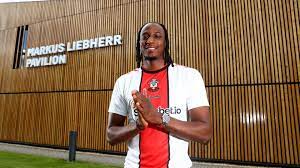 Southampton midfielder Joe Aribo has revealed how the Premier League’s “high quality” made him choose Southampton over Champions League football.

Aribo left Rangers for Southampton in a deal worth £10 million in the summer transfer window, ending three successful years with the Gers, despite the Scottish giants securing Champions League football for the 2022-23 campaign.

“It’s a dream for me to play in the Champions League but I’m also living my dream playing in the Premier League. So, it’s either or, I couldn’t have both at the time so I think for me it’s a very good decision,” Aribo told the club’s in-house channel.

“The Premier League’s intensity, quality gives you everything in a nutshell while in Scotland, intensity is through the roof but I wouldn’t necessarily say quality is as high as compared to the Premier League.”

“Then you’ve got international football where it might be a bit slower paced but quality is high because there are a lot of good players. So, I’d say the Premier League is just everything wrapped into one.”

Aribo joined the Saints with a big reputation, having scored 26 goals in 149 club appearances. The 2021-22 campaign was his best season in Scotland as he managed nine goals while providing eight assists, with Rangers reaching the Europa League final, which he scored in, and won the Scottish Cup.

The Nigeria international has been a mainstay in the Southampton team, playing 13 games in all competitions, 12 in the Premier League, while scoring two goals.

Aribo has played in a number of positions for his new club, including behind the striker, as a deep-lying playmaker as well as on the wing as Southampton have struggled for consistency, having won just three league games so far, to sit 16th on the table with 12 points.

Aribo has explained how the demands of playing for Rangers instilled a winning mentality in him, something he hopes to bring to Southampton.

“When I was in Scotland, it was a given. If you don’t win, it was like the end of the world, literally. You don’t want to do anything; you don’t want to go out so that stuck with me. I’m harsh on myself on performances,” he added.

Southampton visit Crystal Palace in their next league match on Saturday when the 26-year-old will hope to end his four-game goal drought.
(Goal)