- Attention Honourable Sports Minister, the time to ADOPT A CLUB IS NOW 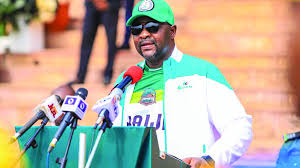 Let me start this piece by first defining the word Unbound. It simply means not bound together, release, separate, not fastened together, not confined, freedom and so much more.

In this context, Unbound means freedom, proliferation, and opening the space for private investors to come in and operate in an environment that is conducive, accommodating, and appreciative.

The Nigeria professional football league as it is today is a 20-clubs league format that has 95 percent government-owned clubs and just 5 percent privately owned clubs.

What this means is that government plays a huge impact in what goes on within and around the league, leaving our football at the mercy of some politicians who see football as a political tool that has to be managed by their political loyalists, who in turn know that the only way they can keep their jobs is by getting results at all costs.

Most times, the men appointed are political loyalists to the government in power.

The majority of them have never played football, have no managerial skills, and lack the basic ideas of running a football club so all they do, is apply orthodox means of winning matches to satisfy their owners

2. The win at cost Syndrome

These loyalists will want to win at all costs as that is the only way to keep their jobs.  It happens every year in the NPFL, before the start of every season, the chairman of the Referees appointment committee and Chairman of the Nigeria Referees Association, pay courtesy calls to state governors at the request of the club owners and at such meetings, continental tickets are promised and delivered at the end of the season.

This has been the biggest bane of the NPFL. It is no longer news that club owners pay match officials large sums of money to pick vital points, especially at home. The Referees play a key role in helping to actualize the win-at-all-cost syndrome and the reason behind this is well understood. The club owners have no idea of how to run the clubs, how to make money from the sale of players, branding, and merchandising in order to meet their overall investments so they are left with just one option, which is to cheat.

In the last few seasons, football hooliganism has been on the rise in the NPFL. The reason is that majority of the club owners are under pressure to get results and when that doesn’t come, they insight the fans against the referees which in most cases leads to a serious infield and off-field crisis.

Over two decades ago, Nitel enjoyed an absolute monopoly as the sole distributor of telecommunication networks in Nigeria until the federal government thought it wise to allow other interested parties to come forward with proposals on how to better the sector. That was how MTN, Econet, and later Globacom came on board and today, the country is better off.

The government realized at that time that Nitel has not lived up to expectation and are happy today with the improvement the sector has made so far.

The way forward: The Adopt A Club initiative

Like the adopt an athlete and adopt a stadium initiative of the Sunday Dare administration which has enjoyed widespread publicity, acceptance, and endorsement, many are of the opinion that the federal government through the sports ministry can appeal to individuals, corporate bodies, and other multinationals to adopt a football club from their state and sponsor the adopted club in the NPFL.

The likes of Aliko Dangote, Baba Ijebu, and Femi Otedola have shown over the years that they have a deep passion for football but they are afraid to come forward and invest in the league because of the negative stories that come out of the system.

Multinational companies like Shell, Oando, AITEO, and telecom giants like Mtn, Globacom, and Etisalat can all adopt a football club, offer them full and total branding and use the same to promote their social responsibility to society.

In the last two seasons, the English Premier League spent over 425M pounds on community development alone. Football in Europe is very big business and the earlier we see the need to gradually take these clubs away from the government, the better it will be for our football.

In 2003, Roman Abraham Abrahamovic bought Chelsea for just over 140m pounds, and earlier this year, the same club was sold for 4.25billion pounds out of which, 1.5b pounds will be used to build a new Stadium for the West London Club.

That is how the football business has grown and the earlier we key in as a country and a people, the better it will be for all of us.