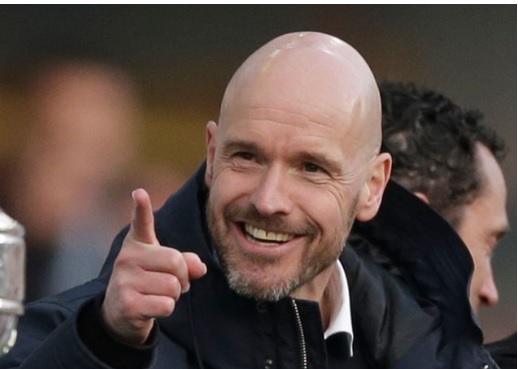 His next move was to knock it straight out for a Sheriff goal-kick.

Ten Hag denied it was the reason he substituted Antony at half-time.

“I don’t have a problem with tricks as long as it’s functional,” said Ten Hag, who also managed Antony at Ajax.

“I demand more from him – more runs behind, more often in the box and more playing in the pocket.

“When there is a trick like that, it’s nice as long as it’s functional. If you’re not losing the ball, then it’s OK – but if it’s a trick because of a trick, then I will correct him.”

Antony has started all of United’s eight matches so far in a busy October, playing the full 90 minutes of last Saturday’s 1-1 Premier League draw at Chelsea, but was replaced with Marcus Rashford at half-time during the 3-0 win against Moldovan champions Sheriff.

Asked if that substitution was a reaction to Antony’s showboating, Ten Hag said: “No. It was more or less planned if we were up.

“I wanted to see Marcus Rashford and Cristiano Ronaldo close together and the dynamic on the right side.”

Former Manchester United midfielder Paul Scholes, however, says Ten Hag will have been “frustrated” by a move that came to nothing – with television pictures showing the manager shaking his head in reaction.

“You saw his reaction on the bench,” said Scholes on BT Sport. “I just don’t know what it achieves?

“Even if you’re 3-0 or 4-0, what does that do for you? I’m not even sure it’s skill, is it? I like to see skill and entertainment, but I’m not sure that is skill or entertainment – it’s just being a clown.”

Owen Hargreaves, another former united midfielder, said he thought such showboating was fine as long as it had a purpose.

“You’re curious. You’re thinking: What’s he going to do? I think we all want to see skill – we all love that – but you need skill with function and need something moving forward,” said Hargreaves.

“If he does it in or around someone, I’ll be jumping out my seat.

“He has come a very long way [in his career] to be at Old Trafford. He probably wanted to show this skill that he does everywhere he goes.

“But I just want to see it with a bit more closer to someone, when you’re up against someone.”

Oritsefemi and Nabila Announces the end of their Marriage