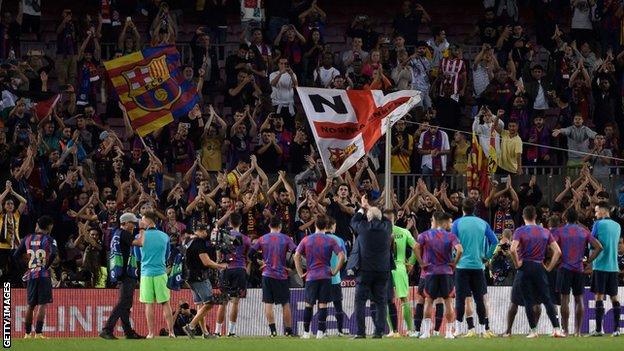 Inter Milan secured their place in the Champions League knockout stage and sent Barcelona into the Europa League with victory against Viktoria Plzen.

Barcelona’s fate was already sealed before Xavi’s side lost 3-0 to Group C winners Bayern Munich at the Nou Camp.

Substitute Romelu Lukaku marked his return from injury with a late goal as Inter comfortably secured the win that sent them to the last 16.

It means Barcelona are guaranteed to finish third and compete in Europe’s second-tier competition for the second successive season.

The Spanish giants were unable to improve the mood among the home support in their final home group game as first-half goals from Sadio Mane and Eric Maxim Choupo-Moting put Bayern on course to maintain their perfect record in this season’s Champions League.

Barcelona thought they had been given a lifeline before half-time but referee Anthony Taylor overturned his initial penalty decision after being sent to review Matthijs de Ligt’s challenge on former Bayern striker Robert Lewandowski on the pitchside monitor.

Serge Gnabry’s curled finish was ruled out for offside after the restart, but the German registered three assists on the night as substitute Benjamin Pavard added to Barcelona’s misery in the fifth minute of stoppage time.

Although many home supporters began leaving long before the final whistle, a group of fans did stay behind and applauded as their players returned to the field at the end of a dismal night for the club.

Having kept their fate in their own hands with a 3-3 draw at Barcelona a fortnight ago, Simone Inzaghi’s Inter completed the job with a game to spare as they made it five wins in six games in all competitions.

With Inzaghi serving a touchline ban, Federico Dimarco was denied at close range by Plzen goalkeeper Jindrich Stanek as Inter dominated from the start at the San Siro.

Midfielder Mkhitaryan headed in Alessandro Bastoni’s cross from the left as Inter broke the deadlock with their 10th attempt after 35 minutes.

Dzeko slotted in from Dimarco’s pass to double the lead over the Czech champions before the interval.

Mkhitaryan struck the post 10 minutes into the second half, but Dzeko’s second from a Lautaro Martinez assist put the result beyond doubt.

Lukaku added a fourth within four minutes of coming off the bench in his first appearance since August because of a hamstring injury.

It doesn’t look good. It is certainly a bruise to Barcelona’s ego and their pride as a club. There has been so much pressure on them because of the financial pressure to deliver on the pitch and generate as much money as possible.

It will be a really big blow for them not to get out of the group stage because they will have budgeted for making the quarter-finals. They will have to come up with other solutions – such as in the January transfer window, they may look to offload some of their higher earners.

Barcelona still have possibilities to win silverware. The domestic cup is definitely attainable and they could still win the league of course. And the Europa League, why not? Yes this is a blow to their confidence in the short run but by the time we return from the World Cup it will be an entirely different situation.

Xavi has come under criticism but that has subsided in the last few games and for now those criticisms have been silenced.
(BBC)