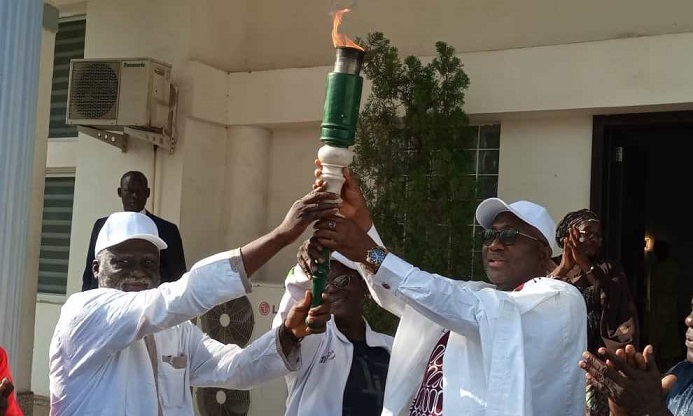 Receiving the Torch of Unity on behalf of the Governor at the government house, Minna on Wednesday, the state Deputy Governor, Alh Ahmed Mohammed Ketso assured the zonal coordinator of the federal ministry of Youth and Sports, North Central zone that Niger State will participate in the festival.

“Considering the importance of this unity that is already established, anchored by the Federal government through the federal ministry of Youth and sports, Niger state would not be an exception. I want to assure you that by the special Grace of God Niger team will be in Delta for the 21st sports competition,” the Governor assured.

He said Niger State was home to varieties of sports, such as Handball, Basketball, and Hockey among others, and that the state will not only participate in the multi-sports event but will compete favorably for medals.

The Governor also disclosed that the approval for the festival had already been given and every financial obligation for the team to participate favorably in the event will be facilitated, promising that he will ensure that the state Ministry of Finance releases the approved funds early enough for the sports ministry to have adequate preparation.

He further reiterated the state government’s commitment to sports development in the state and promised that they will not relent in their efforts of bringing back the lost glory of sports in the state.

The Governor also appreciated the Minister of Youth and Sports for choosing Niger State first to receive the Torch of Unity after the Federal Capital Territory (FCT).

While presenting the Torch of Unity to the Governor earlier, the Zonal Coordinator of the Federal Ministry of Youths and Sports, North Central zone, Mrs. Deborah Simone Pitman said the Torch symbolizes unity among states through sports.

She disclosed that the Torch was lit on Tuesday at the Villa and the next significant state in the North Central after FCT was Niger state, adding they believed that the state was ready for the festival and would bring back medals to make the state and the zone proud.

The Zonal Coordinator also used the opportunity to call on the governors of the North Central states to support grassroots sports development in their respective states because that is where the talents to feed the national teams were dominant.

She disclosed that after the festival there will be the Principal’s cup which is a grassroots program and hoped that all state Governors will support it.

In his remarks, the state Commissioner for Youths and Sports Development, Hon. Yusuf Suleiman said the state was apt in terms of participating in sporting activities, and that they were very much ready to participate actively in the coming sports festival.

“We will do the best we can to take advantage of this window so that we can give better participation at the festival. We have organized and arranged our athletes, so we are prepared and ready to go,” said the Commissioner.

Niger State is expected to participate in 15 events with about 95 athletes, at the forthcoming Sports Festival.

Tope Alabi grateful to God as she marks 52nd birthday