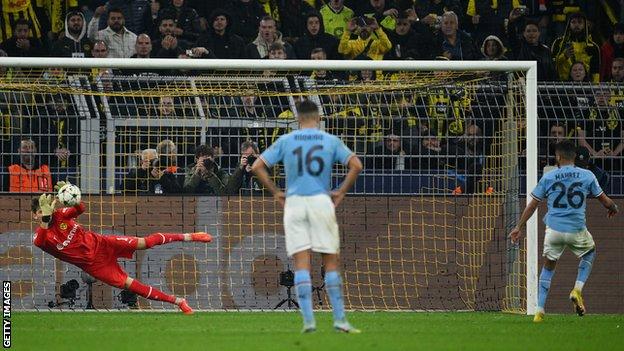 Manchester City boss Pep Guardiola admits they have a “problem” with penalties as they sealed top spot in their Champions League group with a 0-0 draw at Borussia Dortmund despite Riyad Mahrez failing from the spot.

City have failed to score 25 of their 80 penalties, excluding shootouts, since the Catalan took over in 2016.

Mahrez was fouled by Emre Can and stepped up himself, but Gregor Kobel went the right way to save his kick.

Borussia Dortmund also went through to the last 16 with the draw, so both sides will be happy with the result.

“Since I’ve been here we’ve missed 25 penalties, most of them in the Champions League,” Guardiola said.

“It’s too many. You always have to admire the courage, but missing so many penalties is a problem.

“We have to improve. It comes down to fine margins in this competition and these situations can make the difference.”

Former Scotland forward James McFadden, watching the game for BBC Radio 5 Live, said: “I think it was a very good penalty from Mahrez. It’s a side foot with a lot of power, what a save.”

Mahrez has now missed three of his past four penalties for City, after scoring nine of his first 10.

City boss Guardiola surprisingly replaced top scorer Erling Haaland at half-time after just 13 touches. He revealed afterwards that the Norwegian had a fever and a knock.

City get job done but below best again

City will be happy to have won their Champions League group with a game to spare, but it is just one win in their past four games in all competitions now.

Last time out in Europe they drew 0-0 in Copenhagen, and then lost their unbeaten record to Liverpool in the league – before beating Brighton on Saturday.

Guardiola mixed things up with his line-up in Dortmund, giving a debut to 29-year-old keeper Ortega, a summer signing, with Ederson left on the bench.

The German did well to deny Karim Adeyemi and Moukoko in the first half.

Julian Alvarez, who played behind Haaland, made his fourth start for the club, and was one of only three players to test Kobel – along with Ilkay Gundogan and Mahrez with his failed penalty, all in the second half.

Nathan Ake headed a decent chance over too.

Maybe if Haaland, with 22 goals in his first three months at City, was still on, he might have taken it.

Cancelo was taken off too, another player who will not be happy with his first half – with Adeyemi getting the better of him on several occasions out wide.

It is all ultimately academic, with City topping the group amid a relentless pre-World Cup fixture list – but recent performances continue to dip below their early-season swashbuckling form.