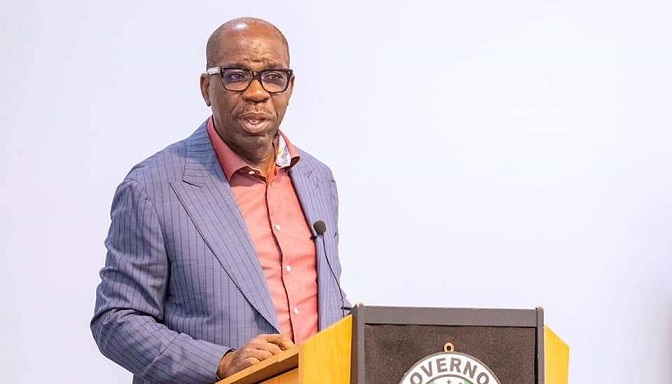 The All Progressives Congress (APC), Edo State Chapter has reacted to Governor Godwin Obaseki over his recent statement that Nigeria will break up if APC retains power in 2023.

According to the APC, by this statement, Governor Obaseki who by his position is the leader in the state has decided to be blowing the ember of the divisiveness of the Nigerian Nation come 2023.

This was contained in a statement by the Publicity Secretary of the party, Prince Uwadiae-Igbinigie.

“The Governor has further exposed the reasons why he has no regard for Governance and has foisted on Edo people a beehive of lawlessness and dictatorship even though he assumed and attained leadership vides a democratic contestation.

Governor Godwin Obaseki’s claims that Nigerian will break if the APC presidential candidate Senator Asiwaju Bola Tinubu wins the presidential election come 2023 is the most unguided and intellectually bereft statement to have come from any person sitting in the corridor of governance in a democratic Nation like ours (Nigerian).

Little did people conclude that Governor Godwin Obaseki lacks the intellectual sagacity and educational behest to enthrone a democratic atmosphere and benevolence in Edo State“.

“What temerity and audacity do Governor Godwin Obaseki possesses to speak of a man who transformed and gave Lagos a road map to economic and political posterity in the comity of states despite the proclivity and inclinations of the Olusegun Obasanjo led PDP Federal Government”.

“The statement Governor Godwin Obaseki made invoked a dire need for a political and legal examination of all the none democratic policies that he has bestowed on Edo people from the ceaseless and unending borrowing without any corresponding effect on the economy of Edo State to the monumental destructions of the know legacies of Edo State like the modern library, central hospital, sales of the pediatric ward of the central hospital, to the conducting pipe of Edo Best and his primordial sentiments of the destruction of private properties and illegal occupation of privately own land without regards to rule of law”.

He said the short-sightedness and shallow memories of Governor Godwin Obaseki were further exposed by his Statement, when he venture into history to uncover the fact that in less than three (3) years the same Governor Godwin Obaseki rigorously and without any limit, campaigned for the APC at both the State and federal levels, eulogizing the effect of Senator Bola Ahmed Tinubu in Lagos political template.

The party further said that the legacies of Bola Ahmed Tinubu in Lagos State albeit Nigerian with the moribund statement of Governor Godwin Obaseki will unveil the hollow knowledge of the Governor of a democratic hallmark in a multi-party democracy where many parties engaged in contestation under a peaceful and enduring atmosphere devoid of rancor and frivolities.

”The statement of Governor Godwin Obaseki has helped to demarket the PDP in Edo state in the mind of Edo citizens who are better enlightened and have unending regard for a united and an indivisible Nigeria because his statement is devoid of the issue-based campaign being promoted by the Nigerian people.

“We the APC therefore as a party called on the Federal Government to keep its security apparatus in place and beam the national security searchlight and intelligence gathering to Governor Godwin Obaseki and the party he represents, the PDP, as there is the great tendency for him and his co-travelers to cause havoc before, during and after the elections”.

“We call on the Edo people and Nigerians at large, to treat the unguided statement of Governor Godwin Obaseki as politically inconsequential and intellectually frailty and exercise their franchise for the great Senator Bola Ahmed Tinubu and the APC in the Presidential election“.