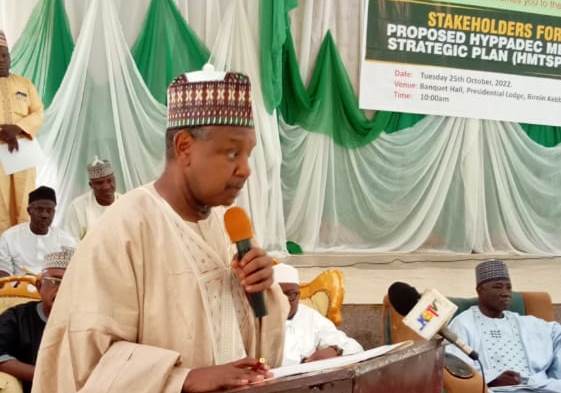 Governor Abubakar Atiku Bagudu of Kebbi State has again spoken about the need to establish a National Drainage Architecture in the county.

He made the statement on Tuesday in Birnin Kebbi at a stakeholder’s forum on the proposed HYPPADEC Medium Term Strategic Plan (2022-2027).

Bagudu said such architecture would support the management of water bodies across the country.

“With the proposed architecture, it can be determined how much is required for instance for 5 to 10 years to support riverine communities rely on water bodies,” the governor said.

According to the Chairman of the APC Governors’ Forum,  there will be effective planning on the hydropower needs of the country.

Bagudu said that flood and drought were resource issues that could be dealt with adequate resources.

The governor also said that hydropower should not be relegated to the background, adding,” it should be accorded a top priority.

“This is crucial if Nigeria really wants to be self-sufficient in electricity generation.

“This will also attract more investments into the hydropower supply sub-sector in the country,” Bagudu added.

He charged lawmakers at all levels to speak out more on hydropower issues in the country.

Bagudu commended the Federal Government for the ongoing construction of the Mambilla Hydropower electricity project, even as he called for more such projects.

He commended the commission for organizing the forum in Kebbi State and initiating of the proposed plan.

He noted that flood affects farmers, fishing communities, and livestock farmers, saying that they all need assistance.

Earlier, the Kebbi State Coordinator, Zubairu Adamu Utono while thanking Governor Abubakar Atiku Bagudu for attending the Stakeholders meeting, hoped that the deliberation will bring succor to HYPPADEC communities, Kebbi State, and Nigeria as a whole.

In his remarks, the Secretary to the Kebbi State Government, SSG, Babale Umar Yauri appreciated the efforts of HYPPADEC activities to communities within a few years of its existence.

He also commended the intervention and support of Senator Abubakar Atiku Bagudu, the Kebbi State Governor in making sure that the commission operates successfully.

The SSG said that HYPPADEC Commission was able to sink 34 solar-powered boreholes, established schools in the Communities they operate; provide fertilizer to farmers as well as relief assistance to communities affected by disasters.

He prayed that the review meeting would reflect on the needs of communities and called for collaboration between HYPPADEC and relevant all stakeholders to enhance its activities.

He described him as the father of HYPPADEC for supporting the activities of the commission.

According to him, the commission has set out indicators in order to achieve its objectives in line with the developmental strides of President Muhammadu Buhari.

The medium-term plan he said would assist the Commission in clearly defining the objectives of HYPPADEC.

In his closing remarks, the Managing Director of HYPPADEC, Alhaji Abubakar Sadiq-Yelwa, commended the Kebbi State government, LGAs, and traditional rulers for their support to the commission, saying the support had made their work easier in the state.

“We are going to support communities in the six catchment states in our intervention of different areas in health, education, security, and water, among others.

“In Kebbi, we are going to provide diagnostic equipment, eco-scanning facilities, and optical dental facilities in some of the general hospitals in the four emirates in the state.

Sadiq-Yelwa commended the participants for honoring their invitation, assuring that the commission would do justice to observations raised by the stakeholders in the meeting.