NLC Direct Workers to Vote Massively for APC in Kebbi 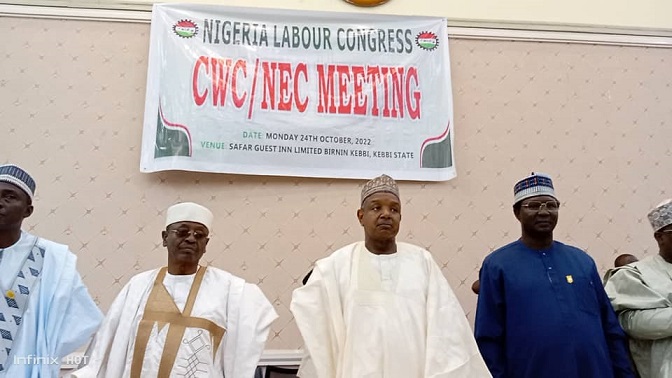 Nigeria Labour Congress (NLC) has directed its members in Kebbi State to vote massively for the governorship candidate of the All Progressives Congress (APC), Comrade Nasiru Idris (Kauran Gwandu) in the 2023 general elections in the state.

While addressing workers before the commencement of its National Executive Committee Meeting of the union held at Safar Conference Center in Birnin Kebbi, the NLC National President, Comrade Ayuba Waba told workers in the state to work hard to ensure the victory of the APC governorship candidate in the 2023 elections.

He said: “I enjoined you to do everything possible for one of us Nasiru Idris for him to win elections in Kebbi State. Use your mouth, your strength, and everything you have to ensure his victory.”

The NLC president said Idris who was a former teacher was NUT and NLC Chairman in Kebbi State before becoming NUT national treasurer and later NUT national president. He said he is currently the national deputy president of the union as such he deserved the union’s support in his bid to become Governor of Kebbi State.

He said: “We are happy your administration has stood with workers and always meeting their needs in kebbi State.

“We remain grateful to you for your hospitality and for providing a secure and conducive place for us to hold our meeting”.

Responding, Governor Abubakar Atiku Bagudu thanked the union for standing with him and his deputy during his first and second term elections as Governor of Kebbi State. He said whatever his administration was able to achieve was made possible because of the cordial working relationship that existed between his government and the NLC

He enjoined labor to include past leaders, ex-governors, and former presidents in their discussion to be able to achieve more in its effort to put the country on the path of prosperity.

“We are happy with the phenomenal response from your efforts and it’s helping us in the achievement we have recorded so far. We wouldn’t have been able to achieve this without the support of the union”, he said.

He described the former national president of the NUT who is now the governorship candidate of his party, APC as a very reliable and dependable ally. He said the union will no doubt support him as they have promised but warmed him against incurring their wrath when he becomes governor of Kebbi State.

Earlier in his address, the APC Governorship Candidate, Nasiru Idris (Kauran Geandu) commended Governor Bagudu for the achievement of his administration in the past seven years. He said the governor has moved Kebbi State beyond the expectations of many and workers in the state.