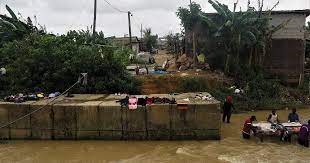 The market town of Kousseri in the Far North Province of Cameroon, close to the border with Chad, has been struggling with major floods for a week.

Two regional rivers have their confluence here, the Logone and Chari, and both are seeing exceptionally high water levels that are predicted to rise further.

Sandbags were being used in an attempt to contain the rivers, but for many parts of Kousseri it was already too late.

Homes in the town have been flooded and people were seen walking through knee-high muddy water, carrying possessions to try and save them from the floods.

Families have been left homeless and have built temporary shelters from sticks and sheets on dry higher ground.

“I’m in serious trouble,” told Kousseri resident Bouba Vira, whose family have been forced to abandon their home.

Heavy rains caused enormous damage in August, and again the situation has become serious due to the rising flood waters.
The Logone and Chari rivers separate Cameroon from neighboring Chad which declared a state of emergency this week to help tackle the crisis.
(Africanews)