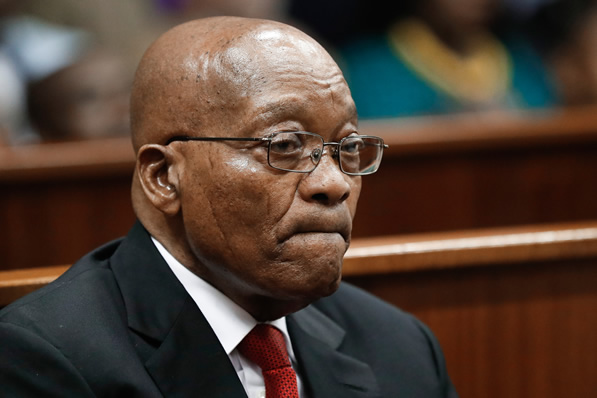 Former South African President Jacob Zuma, forced to resign in 2018 as he was so mired in corruption scandals and accusations, accused his successor Cyril Ramaphosa of being “corrupt” on Saturday.

“The president is corrupt” and “he has committed treason,” he said in his first reaction to allegations that Ramaphosa was involved in an obscure burglary case.

“No president should handle private matters while in office” because it is contrary to the oath of office taken by the head of state, he continued at a news conference in Johannesburg.

An independent commission was set up in September by the South African Parliament to investigate a burglary case that has been bothering President Ramaphosa for several months, accused of money laundering and corruption.

The results of the investigation could lead to a possible vote in parliament for his impeachment.

Mr. Ramaphosa is accused of having concealed from the police and the tax authorities a burglary in 2020 at one of his properties, during which large sums of cash were found hidden in furniture.

An investigation was launched after a complaint was filed in June by former South African intelligence Chief Arthur Fraser. According to Fraser, burglars broke into a farm owned by the president in Phala Phala, in the northeast of the country, and stole four million dollars (4.08 million euros) in cash.

The complaint accuses Mr. Ramaphosa of concealing the robbery from the police and the money found there from the tax authorities, as well as organizing the kidnapping and interrogation of the robbers and then bribing them to keep quiet.

Mr. Ramaphosa denounced this as political maneuvering, denied the allegations of kidnapping and bribery, questioned the amount of the theft and claimed that the money came from the sale of livestock.

The case has put the president in turmoil ahead of the ANC’s upcoming decision on whether to present him as a candidate for a second term in the 2024 presidential election.

Zuma said the ANC conference in December “will have to deal with this case” and decide whether or not the president can stay on. “Many are saying the president has failed,” he continued.

Another former head of state, Thabo Mbeki, also lamented the ANC’s situation ahead of the December conference.

“Our president is under great pressure (.) over the Phala Phala farm case,” he said at a separate meeting in Johannesburg.

Former President Zuma, who was sentenced to 15 months in prison for stubbornly refusing to answer a commission investigating corruption, finished serving his sentence earlier this month.

Two months into his sentence, Zuma was released on health grounds and placed under judicial supervision.

On Saturday, he called his incarceration “illegal” and blasted the judiciary.

“The fact is that the highest court in this country has violated the law,” he said, saying “we must ensure that judges do not turn into politicians.

Mr. Zuma, who is still facing trial in a bribery case dating back more than 20 years, announced in late September that he was considering a return to politics.
(Africanews)