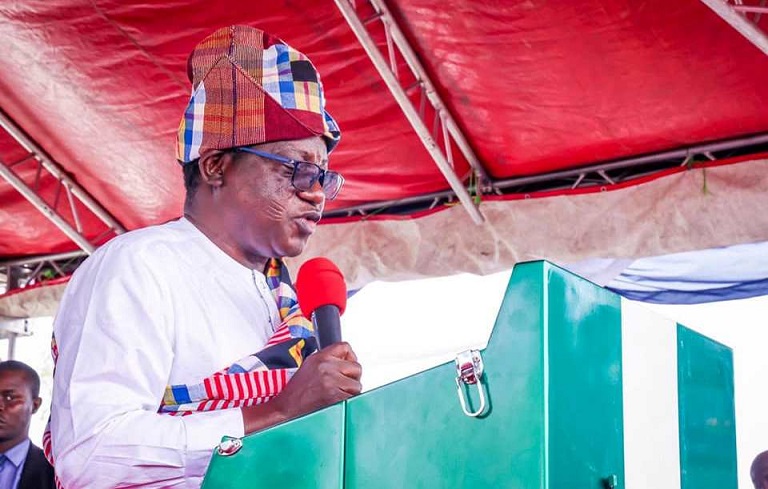 Governor Simon Bako Lalong of Plateau State has charged the new Aku Uka, His Royal Highness Manu Ishaku Adda Ali Matakhitsewen to govern his people with the fear of God and work hard to ensure that all forms of crimes and threats to security are eliminated.

The spokesperson to Governor Lalong, Dr. Makut Simon Macham in a statement, Saturday, said he made the charge while speaking at the installation and presentation of staff of office to the Aku Uka by Taraba State Governor Darius Dickson Ishaku in Wukari.

According to Lalong, the installation was a unique moment that will linger in the minds of the people because the last time this type of event took place was in 1976 when the late monarch was crowned.

He congratulated His Royal Highness for ascending the throne of his forefathers at this time when there is a greater need to foster development, peace, and progress of the land and also commended the king-makers for conducting a selection process devoid of rancor and bitterness.

The statement quoted him saying: “Being alive to witness this special event calls for thanksgiving to God and appreciation to the ancestors for giving us this rich and vibrant culture that we continue to uphold.

“I, therefore, bring you the goodwill and warm felicitations of the Government and people of Plateau State with whom Taraba State and indeed the Kwararafa Kingdom shares very close affinities.”

He added that he was confident that the selection of the Aku Uka will usher in a period of greater prosperity within the Kingdom, Taraba State, and Nigeria at large.

Governor Lalong reminded the new Aku Uka about the challenges that the nation faces particularly insecurity and crime which require the support of the traditional institution to be brought under control.

He then expressed hope that the Royal Father will do everything possible to ensure that he mobilizes your subjects to rise against crime in whatever form.

“Using your wealth of experience and the influence of your office, it will be very important for you to also work with the Government and non-governmental organizations towards ensuring that job opportunities are created particularly in entrepreneurship and agriculture that are synonymous with the Kwararafa Kingdom.

“We look forward to you leading your subjects towards reviving the spirit of hard work, resilience, and excellence that is known in the Kwararafa Kingdom.

“Already, the Northern Governors Forum has submitted its proposal to the National Assembly to find a suitable role for the traditional institution in the Constitution.

“We desire to see our royal fathers play a greater role in governance as it used to be in the pre-colonial and colonial times so as to be able to confront the challenges we face today.

“I know his Royal Highness will continue to play the role that his predecessor played within the Northern Traditional Council and the nation at large,” Governor Lalong added.

Taraba State Governor, Darius Ishaku while handing over the staff of office to the new Aku Uka said the ancient Kwararafa Kingdom still remains a reference point for civilization, arts, culture, and innovation which still resonates with its sons and daughters all over the world.

He said the new monarch emerged through a free and fair process that was decided by the kingmakers without any interference from the Government.

Darius charged the Royal Father to work assiduously in mobilizing his subjects towards promoting development in education, agriculture, health, and infrastructure, assuring him of the support of the Government.

Governor Ishaku used the occasion to warn traditional rulers against involvement in partisan politics and arbitrary sale of lands as well as allowing illegal mining in their domains.

Former Minister of Defence General T.Y. Danjuma said the event is a special moment for the people of the Kwararafa Kingdom who are known for hard work, unity, and pursuit of excellence.

He frowned against the level of insecurity in the country manifesting in kidnapping, banditry, and terrorism which he said must be tackled immediately to save the nation.

T.Y. Danjuma said the people must be involved in their protection and also work with the security agencies to confront criminals whose main aim is to destroy Nigeria.

Sultan of Sokoto Alhaji Sa’ad Abubakar said that the task before the new Aku Uka is enormous and calls for a commitment that is built on vision, fairness, and justice.

He advised his colleague never to allow politicians to distract him from serving his people justly and honestly as doing anything contrary to his calling and the wishes of his ancestors will not bring progress to the land.

The Aku Uka in his remarks thanked the people for supporting him as he ascends the throne of his forefathers.

While pledging to be a father to all, the royal father promised to work in the footsteps of his forefathers who toiled to build a kingdom that embraced diversity, peace, unity, and progress.

He also promised to thank the guests who honored him and the people of the State for their show of love.