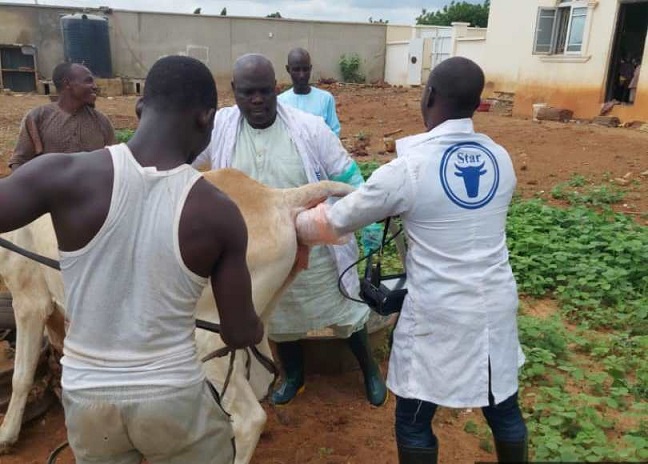 Sokoto state, the second largest livestock producer in Nigeria has seized the opportunity to upscale its economic prosperity, improve internally generated revenue, and enhance the socio-economic well-being of its people through Livestock breeding and transformation technologies.

The state is endowed with vast arable land and enormous Livestock resources of about 3.4 million cattle, 1.9 million sheep, and 2.9million goats according to state statistics.

The State cattle breeding project has over the years received tremendous success albeit with some challenges that need to be addressed in its second phase of execution.

The project will drive transformation in the Livestock sub-sector through the use of technological improvement methods while ensuring an eco-friendly livestock-rearing system.

The project boasts of many components that include artificial insemination, embryo transfer, pasture development, meat, and milk-added value, and social empowerment among many others.

It will serve as another method of improving cattle reproduction in the state especially now that most of the local breeds of cattle have either been rustled or forced to flee from the state as a result of banditry.

The state adopted modern breeding technologies such as artificial insemination (AI) for the rapid upgrading of indigenous cattle to enhance productivity in milk and meat.

In 2019, Sokoto state procured 117 exotic animals for acclimatization and distributed them to 13 cluster farms in the state with installed corals and milk collection facilities.

The project commenced cross-breeding of imported exotic Animals with indigenous cattle (Sokoto Gudali), Heifers versus Jersy Bulls, Sokoto Gudali, and Heifers versus Brangus bull with a view to boosting and transforming local breeds.

According to the State Commissioner for Animal and Fisheries Development, professor Abdulkadir Usman Jubaidu, the projected revenue expected from the project coupled with the cumulative cost of semen processing, preservation, and maintenance of donor animals per annum stands at 70.6million Naira and the price of processed semen stands at 844.8million Naira, while the profit expected per annum will be 774 2million Naira respectively.

Prof. Junaid maintained that politics and policy problems were among the challenges bedeviling the prospects of the project since its inception.

“At times many carefully thought and believed that the project will be abandoned soon as changes of governments occur out of political expediency.

“The Naira to Dollar exchange rate inconsistency and difficulties in getting a letter of credit for the purchase of live animal is also a challenge, the absence of effective cooperatives/farmer associations, NAFDAC, and company registrations were also parts of the challenges the project encountered.”

The state government embarked on a livestock transformation project to make the state economically viable and help to improve the lots of the populace, he averred.

He further explained that the project has all the potential to contribute to the economic growth of the state, provide jobs, create socio-economic development, and self-reliance as well as reduce the challenges of insecurity in the state and the country.

Speaking to Stallion Times in Wakeje village of Wamakko local government area, the proprietor of  Sidi Umar farm I&II said he employed 25 farm attendants who worked in various sections of the farm that includes watering, feeding, security, and environmental cleaning.

He said since the commencement of the breeding technology initiatives, his farm is able to have, and raised calves through cross-breeding and artificial insemination.

As time goes on, his farm would also provide a similar gesture to owners of local breeds seeking cross-breeding, he added.

The visiting team leader of the project and representative of the Director of Finance Development (DFD), Central Bank of Nigeria, Amina Bello assured of more interventions to the project to enhance food security and generate employment for the teaming youths in the state and country.

Bello commended the Sokoto State government for its giant effort towards achieving better results in the implementation of the state cattle breeding project.

She called on other state governments with similar initiatives to emulate Sokoto state.