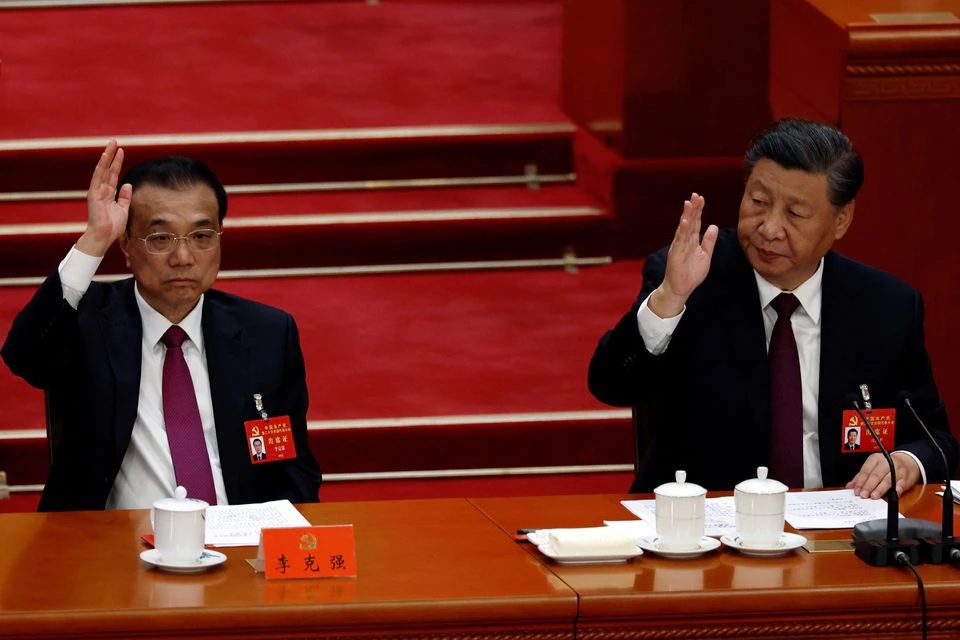 China’s Xi Jinping secured a precedent-breaking third leadership term on Sunday and introduced a new Politburo Standing Committee stacked with loyalists, cementing his place as the country’s most powerful ruler since Mao Zedong.

Shanghai Communist Party chief Li Qiang, 63, followed Xi onto the stage at the Great Hall of the People as the new leadership team was introduced, meaning he is likely to succeed Li Keqiang as premier when he retires in March.

The other members of the seven-man Standing Committee, China’s top governing body, are Zhao Leji and Wang Huning, who return from the previous committee, and newcomers Cai Qi, Ding Xuexiang and Li Xi. Li Qiang is also new to the Standing Committee.

All are perceived to have close allegiance to Xi, 69, who was also re-appointed on Sunday as chairman of the Central Military Commission.

“An abnormally lopsided victory for one faction, which is rare in the tradition of the Communist Party, in the past there would be a rough balance of power,” said Willy Lam, senior fellow at U.S. think tank the Jamestown Foundation.

“It means there won’t be any checks and balances. Xi Jinping also has total control over the larger Politburo and Central Committee,” he said.

The unveiling of the Standing Committee and the larger 24-member Politburo comes a day after the closing of the ruling Communist Party’s 20th Congress, where amendments were added to the party charter aimed at cementing the core status of Xi and the guiding role of his political thought within the party.

The Standing Committee lineup is further confirmation that Xi’s grip on power is undiminished by the events of a tumultuous year, including a sharp economic slowdown, frustration over his zero-COVID policy, and China’s increasing estrangement from the West, exacerbated by his support for Russia’s Vladimir Putin.

“In terms of policymaking, it does mean that there is likely to be more deference to Xi Jinping’s own views about how to move the country and the economy forward,” said Alvin Tan, head of Asia FX strategy at RBC Capital Markets in Singapore.

“I can imagine that zero-COVID policy is likely more entrenched, and there’s going to be further push on this issue of common prosperity and the like,” he said.

As expected, the new line-up does not include a clear successor to Xi, the son of a Communist Party revolutionary who has taken China in a more authoritarian direction since rising to power in 2012.

The unveiling comes a day after Li Keqiang and Wang Yang, seen by analysts as relative moderates that were young enough to serve longer in top decision-making bodies, were excluded from the wider Central Committee. Both have ties with the Communist Youth League, a once-influential group that experts say has lost power under Xi.

Xi laid the groundwork to rule beyond a decade when he eliminated the two-term limit on the presidency in 2018. His term as president is likely to be renewed at the annual parliamentary session in March, where the next premier will also be officially named.
(Reuters)

Lesotho election body says it made a mistake over parliament seats