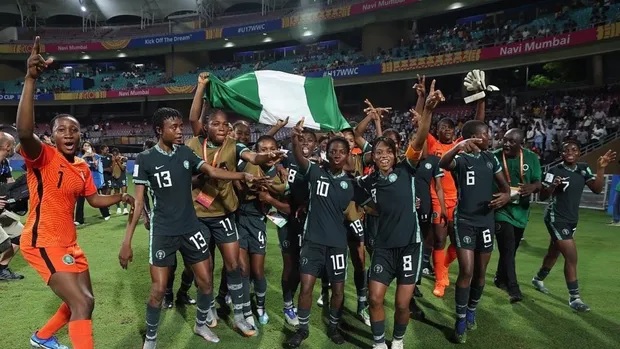 Nigeria’s Flamingos overcame favorites United States 4-3 on penalties after the game ended 1-1 to reach the semi-finals of the U17 World Cup.

In the game at D Y Patil Sports Stadium in Mumbai, the Flamingos took the lead in the 26th minute when they were awarded a penalty after Amina Bello was fouled inside the box. Omamuzo Edafe stepped up to send goalkeeper Valentina Cerri Do Amaral the wrong way.

USA levelled matters in the 40th minute when Amelia Villarreal’s effort took a deflection to beat Flamingo goalkeeper Faith Omilana. With the game ending 1-1 in normal and added time, penalties were used to decide the winner.

Since losing their Group B opener against Germany 2-1 on October 11, Nigeria under coach Bankole Olowookere have gone ahead to win their last three matches.

After Germany, they recovered to beat New Zealand 4-0, and saw off Chile 2-1 to reach the quarters where they defeated USA.

Edafe was Nigeria’s chief architect after she stepped up to put them ahead and she also converted the decisive penalty to send the team to the semis.

The victory enabled Nigeria to break a jinx by reaching the last four of the competition for the first time. The Flamingos have taken part in the finals six times, and they have managed three quarter-finals on three occasions – 2010, 2012, and 2014.

“I’m happy with the win, there is nothing I can give Nigerians than to win the game. We are happy with the team, no one gave us a chance but we aren’t destined to go out in the quarter-final. I’m happy, we have a good future ahead of us.”

Olowookere’s girls will next face the winners between Colombia and Tanzania in the last four at the Pandit Jawaharlal Nehru Stadium on October 26.