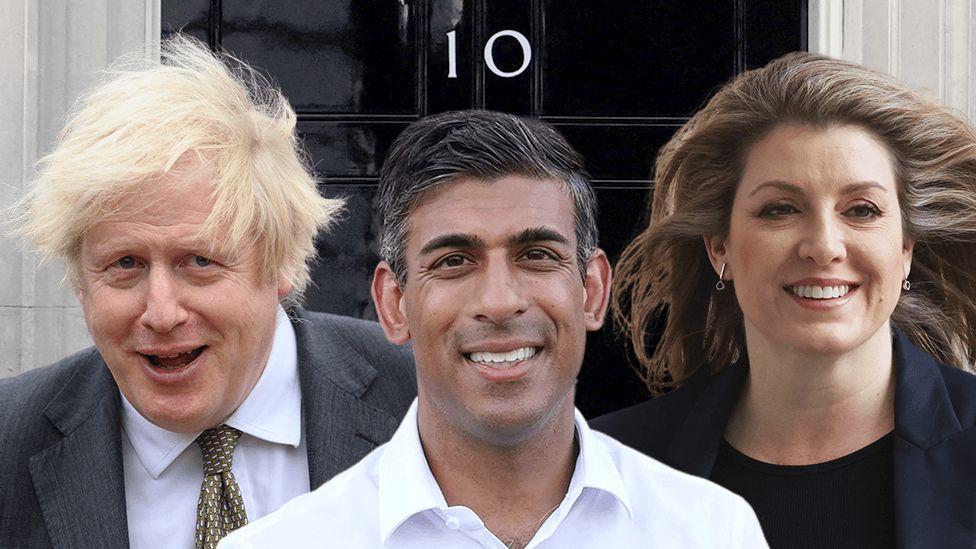 British Conservative Party politician Rishi Sunak is said to have amassed enough support to stand for the Tory leadership contest, as speculation grows that former Prime Minister Boris Johnson will join the race to succeed Liz Truss, who bowed out after six turbulent weeks, becoming the shortest-serving prime minister.

Supporters of Sunak, who served as chancellor under Johnson, said on Friday night he had received nominations from 100 Tory MPs to pass the threshold required way ahead of Monday’s deadline. There was no word from Sunak, who has yet to publicly declare his candidacy.

The United Kingdom’s ruling party has been racked by turmoil with two prime ministers resigning within a space of months, with Liz Truss dramatically announcing her resignation on Thursday after her tax cut plans and economic U-turns plunged the markets into chaos.

“Honoured to be the 100th Tory MP to support #Ready4Rishi,” senior backbencher Tobias Ellwood tweeted, as other backers of Sunak also said he had crossed the barrier.

Sunak will automatically become party leader and prime minister if his opponents fail also to win 100 nominations from their fellow Tory MPs.

Security minister Tom Tugendhat, who ran for the leadership himself after Johnson was toppled in July, also endorsed Sunak: “We need economic stability. That’s why I am backing Rishi Sunak,” he said on Twitter.

Neither Sunak nor Johnson has publicly declared they are running. But Johnson cut short a Caribbean holiday to take part in the accelerated contest, which will see Tory MPs hold a vote on Monday before a possible online ballot for party members next week.

British media reported that Johnson arrived back in the UK on Saturday. His flight landed at London’s Gatwick Airport.

James Duddridge, one of Johnson’s closest allies in parliament, said he had been in contact with his old boss via WhatsApp.

“He said … ‘We are going to do this. I’m up for it’,” the MP said, as a Sky News reporter posted a photograph apparently showing Johnson on a flight home from the Dominican Republic.

The Sunak and Johnson camps are reportedly seeking talks to see if there is scope for a unity deal, although there is plenty of bad blood since the former prime minister’s ouster in July.

Al Jazeera’s Stefanie Dekker, reporting from Westminster, said that the Conservative Party is deeply divided over who the next prime minister should be.

“There is a real economic crisis in Britain, where people cannot make ends meet. Also there is an energy crisis going on with energy prices rising,” she said.

“Whoever becomes the new prime minister is going to have to tackle immediate extremely serious issues here,” Dekkers added.

The leader of the House of Commons and former defence secretary Penny Mordaunt was the first to formally declare her candidacy on Friday. It would be her second contest for the party’s leadership after she lost out to Sunak and Truss in the fifth round.

“I’ve been encouraged by support from colleagues who want a fresh start, a united party and leadership in the national interest,” she said on Twitter announcing her bid.

But polling company YouGov found that three in five voters now want an early general election, in line with demands from opposition parties, as Britons struggle with a worsening cost-of-living crisis.

Labour and other parties argue only an election can end the months of political chaos, sparked when Johnson was himself forced out after non-stop personal and political scandals.

In the resultant contest, Truss won the support of just over 80,000 Tory party members, defeating Sunak, who correctly warned that her right-wing programme of debt-fueled tax cuts would crash the economy.

Truss announced on Thursday she was quitting after just 44 tempestuous days in office that saw the Chancellor of the Exchequer sacked after his disastrous economic plans drew market backlash and Home Secretary Suella Braverman forced out after a series of gaffes and breach of ministerial rules.

Political website Guido Fawkes, which is running a rolling spreadsheet of Tory MPs’ declared support, had Sunak on 103, Johnson on 68 and Mordaunt on 25 by late Friday.

Defence secretary Ben Wallace, a favorite of the Tory grassroots, told reporters he was not standing himself. “At the moment, I’m leaning towards Boris Johnson,” he said.

But Wallace added that Johnson still had “some questions to answer” over the multiple scandals, which resulted in a yet-to-launch investigation in the House of Commons.

If found guilty of lying to the Commons over the “Partygate” scandal – lockdown-breaching revels held in Downing Street – Johnson could be suspended or even expelled from parliament.

As a result of such controversies, Johnson left Number 10 with dismal poll ratings, and other Tories were aghast at the prospect of his coming back.

Veteran backbencher Roger Gale warned that Johnson could face a wave of resignations from MPs refusing to serve under him as leader.

Johnson’s ambiguous appeal was underlined by a YouGov poll that found 52 percent of voters opposed to his return.
(Al Jazeera)