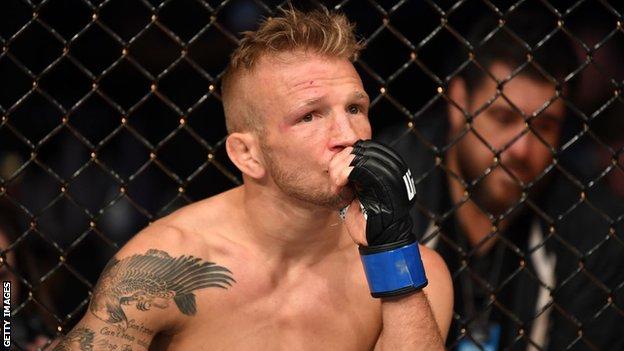 The two-time UFC bantamweight champion was set to face Henry Cejudo for the flyweight championship and an opportunity to become only the fourth fighter in history to hold belts simultaneously in two divisions.

After spending all 19 of his previous fights at bantamweight, American Dillashaw ran into a problem when trying to cut the extra 10lbs for his flyweight debut – his body started to shut down.

Dillashaw discovered that in his efforts to shed weight, his body had turned anaemic – a condition where a lack of healthy red blood cells prevent adequate oxygen being supplied to body tissue, causing fatigue.

In an effort to boost his red blood cell production, Dillashaw made a decision he admits was a mistake – he took the banned substance Erythropoietin (EPO).

After the United States Anti-Doping Agency (Usada) discovered the substance in testing around the fight, Dillashaw relinquished his title before being banned for two years.

Dillashaw, who served his suspension and now faces Aljamain Sterling for the bantamweight title at UFC 280 in Abu Dhabi on Saturday, says critics often ignore the reasoning behind why he took EPO.

“People don’t [care]. They just think they know what you did but they don’t actually really even know,” the 36-year-old tells BBC Sport.

“It’s not a steroid. It’s not going to make you bigger, stronger or faster. It’s medication that a cyclist or a triathlete would use yet I wasn’t running for eight hours, I’m an anaerobic athlete.”

He continued: “I was at the time getting ready for the biggest fight of my life and I was just a shell of myself and as you can imagine, when you’re supposed to be the baddest man on the planet, that didn’t feel very good.

“So I tried to self-medicate to get back to normal and unfortunately I made a mistake.”

Dillashaw took full responsibility for his actions in an apology on Instagram, saying the decision to take the substance was solely his and one of the hardest parts of being caught was the attention it brought his coaches and team-mates.

He says the first six months were the most difficult, where he struggled to forgive himself.

“At first it was the ridicule I was going through, me fessing up to everything and owning up to the mistakes I made. It came down hard, from being on top of the world to the bottom, as far as you can get,” he said.

“I also went through double shoulder surgery at the same time and being on the couch, laid up and not being able to do what you love to do is hard to wrap your brain around.”

Despite this, Dillashaw’s belief never wavered that he would return to the UFC and compete again at the highest level.

He used the time away from the sport to grow as a person, spending more time with his wife and son and developing his business interests.

He made his UFC comeback in July last year, beating Cory Sandhagen by split decision, before earning the title shot against Sterling.

Dillashaw cites his mental toughness as the key to overcoming his suspension and returning to the sport at the highest level.

“I’m willing to push through anything. I won’t be held down and nothing can break me,” he said.

“I went through some of the worst that’s possible to go through and you know, yes, it was my own choice, but I handled it all with pride.”
After discovering the EPO, Usada retested all of Dillashaw’s samples dating back to 2016 and found they were negative, eliminating suspicion he may have taken banned substances in the past.

Despite this, Sterling has suggested Dillashaw has been cheating for a long time and may still be finding ways today to avoid detection by Usada.

Dillashaw says Sterling is using the accusations as ready-made excuses.

“It’s just excuses so he can say I’m sauced up as the reason for why he lost,” he said.

“They [Usada] put me under a microscope, which they should, and they came back and showed that [2019] was the only time [he cheated].

Dillashaw says he has been tested twice in the past two days and praised Usada’s rigorous system.

“With Usada involved it’s nearly impossible [to cheat],” he said.

“They do their homework. They show up at your houses at 6am in the morning and then in the evening. They will test you back-to-back, it’s completely random. They do a good job.”

Jamaican-American Sterling, 33, has been the bantamweight champion since defeating Petr Yan in March last year.

His last fight was in April where he defended his belt in a rematch against Yan, earning a split decision victory to extend his record to 21 wins and three defeats.

Dillashaw says beating Sterling on Saturday for his third title reign will be a chance to prove people can recover from their mistakes.

“Do not let your mistakes define you. Everyone in their life is going to make a mistake, some bigger than others,” he said.

“Keep your head down, work hard, work on yourself and get back to the top.”
(BBC)