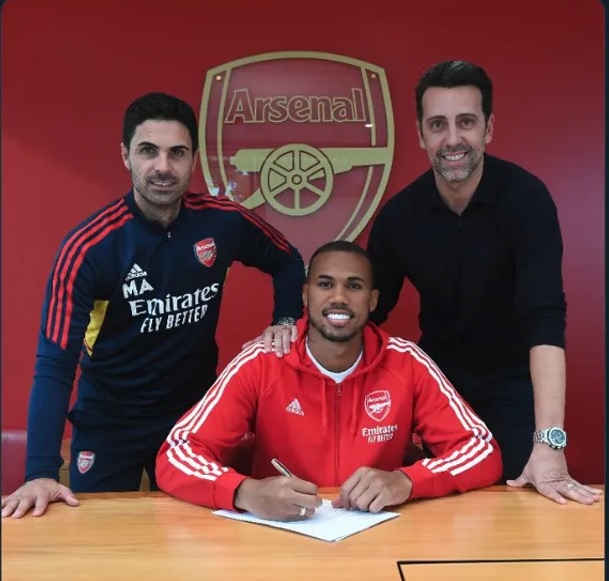 Gabriel has signed a new contract at Arsenal until 2027 after a fantastic start to the 2022-23 season.

Gabriel has penned a new long-term contract with Arsenal running till 2027. The Brazilian has played 10 times for the Gunners in the Premier League so far this season, scoring one goal.

Forming a solid partnership with William Saliba, the Gunners have conceded just 10 goals and currently top the table on 27 points.

Since his debut in September 2020, the 24-year-old has made 81 appearances for Arsenal. He scored on his debut against Fulham and won the club’s player of the month to cap off a fine start to life in north London. He is yet to make an appearance for Brazil, but was called up to the senior squad in November 2021.

Arsenal are looking to tie down more talent in the coming months with contract negotiations for Bukayo Saka and Gabriel Martinelli in the pipeline. Boss Mikel Arteta is looking to build for the future with a core group of young players.

In reaction to the contract Gabriel told Arsenal’s official website: “I’m very happy to sign this new contract with Arsenal, because it’s such a big club. It’s my dream and today is the best day of my life.

Manager Arteta was also happy with the extension saying: “Gabi has shown huge qualities since he joined us. He is a young player with a great work ethic and his consistent strong performances have been hugely important to us over the past two seasons.

Working with Gabi every day is a pleasure, he has formed strong relationships with everyone at the club and we’re so pleased that he has committed to us on a long-term contract.”

The Gunners are looking to make it 10 wins from 11 games as they travel to the south coast to take on Southampton. They then return to Europa League action after qualifying from the group stages last night against PSV.