Menu
Home Opinion What politics has joined together politics has put asunder: The lesson for the rest of us
Opinion 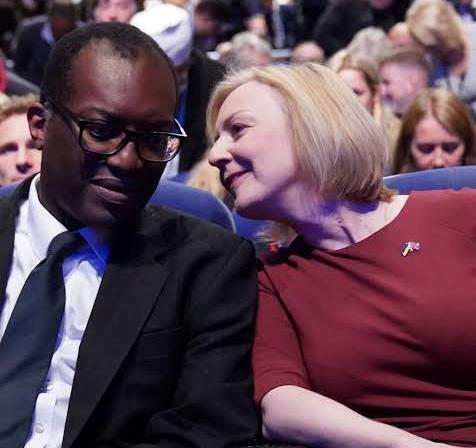 Kwasi Kwarteng and Liz Truss are not only close associates but longtime friends. They were even one-time neighbors. Yet, the British Prime Minister had to recently sack her finance minister for absolutely no fault of his.

Mosaic law specifies a Day of Atonement on which the ancient Hebrews, “used to take a live goat (hence the term scapegoat) upon whose head the priest would lay both hands while confessing the sins of the people. Having thus had those sins transferred to it, the animal would be led away to the wilderness, the people’s sins and blame vanishing with it.”

The ancient Greeks were also not too different in deflecting blame.

“The Athenians regularly maintained a number of degraded and useless beings at the public expense; and when any calamity, such as plague, drought or famine, befell the city these persons were led about and then stoned outside the city.”

I do not if Truss plays chess, perhaps she had always kept Kwarteng in check knowing all along she was going to throw him under the bus when it was checkmate.

As the campaign to replace Boris Johnson was playing out, she proposed a controversial tax cuts package which Rishi Sunak her main rival and then finance minister had predicted was going to be harmful to the British economy. He insisted what she was proposing, “isn’t a plan but a fairy tale.”

Regardless Truss stuck to her guns and continued to fire on all cylinders about her proposal.

In office, her tax cuts policy implemented through Kwarteng backfired with disastrous economic consequences as accurately forecasted by Sunak. Liz had two options as prescribed by 48 Laws of Power, “apology and excuses or, a scapegoat.”

Even if Kwasi had any doubts or reservations about the policy, under the orbit of the most powerful blonde in Britain any man’s better judgment would have taken French leave.

I am therefore not surprised when he wrote in his resignation letter, “You have asked me to step aside. I have accepted”, the Prime Minister with a nice smile but iron teeth replied, “I deeply respect the decision you have taken today. You have put the national interest first.”

Simply put, thank you very much for being such a convenient lame duck.

What is the lesson for the rest of us?

There are actually two lessons.

Second, have an exit strategy when working for those in power or in any high position because:

“Near the end of the 2nd century AD, as China’s mighty Han Empire slowly collapsed, the great general and imperial minister Tsao Tsao emerged as the most powerful man in the country. During the siege of a key city, he slightly miscalculated the timing for supplies of grain to arrive from the capital. As he waited for the shipment to come in, the army ran low on food, and Tsao Tsao was forced to order the chief of the commissariat to reduce its rations.

Tsao Tsao kept a tight rein on the army and ran a network of informants. His spies soon reported that the men were complaining, grumbling that he was living well while they themselves had barely enough to eat. Perhaps Tsao Tsao was keeping the food for himself, they murmured. If the grumbling spread, Tsao Tsao could have a mutiny on his hands. He summoned the chief of commissariat to his tent.

“I want you to lend me something, and you must not refuse,” Tsao Tsao told the chief.

“What is it?” the chief replied.

“I want the loan of your head to show to the troops,” said Tsao Tsao.

“But I’ve done nothing wrong!” cried the chief.

“I know,” said Tsao Tsao with a sigh, “but if I do not put you to death, there will be a mutiny. Do not grieve – after you’re gone, I’II looks after your family.”

Put this way, the request left the chief no choice, so he resigned himself to his fate and was beheaded that very day. Seeing his head on public display, the soldiers stopped grumbling. “

Like a few soldiers under Tsao Tsao’s command discerning British will certainly see through Liz Truss’s gimmick but unfortunately, that is not what history would remember because she is of the right color.

Kwasi Kwarteng will always be referred to as the all-time British finance minister with the shortest term in office of 38 days because he is of the wrong color.