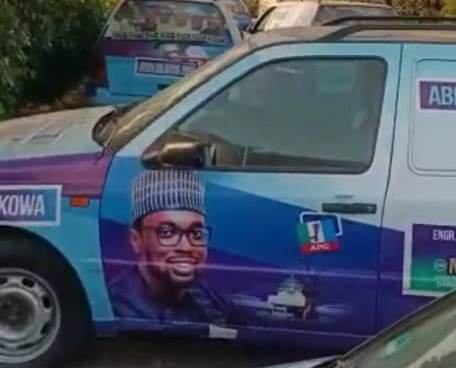 The New Nigerian Peoples Party (NNPP) has demanded an immediate investigation into the alleged diversion of state resources by Abba Ganduje, the favorite son of the Kano state governor Abdullahi Umar Ganduje who is also the All Progressives Congress (APC) candidate for House of Representatives, Dawakin Tofa, Rimingado, and Tofa federal constituency.

The party chairman Hon. Umar Haruna Doguwa said in a statement that it had discovered that the state government had diverted over thirty (30) vehicles from the Kano Internal Revenue Service (KIRS) to the campaign activities of the APC candidate.

The vehicles emblazoned with Abba Ganduje’s image are set to be distributed to the APC ward chairmen of Rimingado, Tofa, and Dawakin Tofa Federalconstituency to checkmate the incumbent Tijjani Abdulkadir Jobe who distributed about twenty cars to his party members recently.

The statement further revealed that the said vehicles have been assembled at the premises of the temporary campus of the Northwest University, Kano waiting for the onward distribution to supporters of Ganduje’s son Abba.

The opposition party also faulted the deposition of the vehicles at a government institution (Yusuf Maitama Sule University’s city campus) as a violation of the Independent National Electoral Commission (INEC) guidelines for political campaigns.

“We, therefore, request for the anti-graft agencies such as EFFC, ICPC, and INEC to investigate both mismanagements of state resources, conflict of interest, and violation of election guidelines.”

“Governor Ganduje is known for running a government of nepotism with crass impunity by allowing too much involvement of his family into the affairs of the state administration, as a leading opposition party, we will no longer keep mute on such excessive recklessness,” Doguwa reassured

The party also urged voters in the affected constituency and across the state to reject politics of nepotism, corruption, and misplaced priorities.