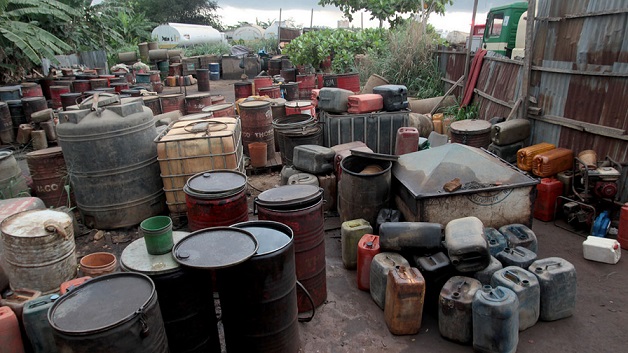 The Nigerian Navy and Nigeria Security and Civil Defense Corps (NSCDC) have raised concerns over security measures and the way forward to tackle the menace of crude oil theft in the country.

The News Agency of Nigeria that the security agencies made this known in Abuja at the ongoing maiden edition of the Annual Energy and Labor Summit being organized by the Petroleum and Natural Gas Senior Staff Association of Nigeria (PENGASSAN).

According to the report, the PENGASSAN Energy and Labor Summit 2022 is tagged ‘’Energy Transition and its Effect on Workforce in the Nigerian Oil and Gas Sector”.

Speaking on the “Menace of Crude Oil Theft, Government Response and the Way Forward” Commodore Stephen Ibrahim, Director of Operations ( DG), the Nigerian Navy said efforts were on the ground for the acquisition of more equipment to control the waterways.

He said Nigeria had about 84,000 square nautical lands and one of the largest responses along the West African coast.

“You can imagine what it takes to maintain 24 hours presence in our waterways. We can never have enough equipment which is why we also complement it with the use of Maritime Domain Awareness Capacity Equipment.

“To maintain this equipment take a lot of resources, to fuel an average ship can take six tankers for it to remain seven days at sea.

“There are other demands that require resources but we try our best to maintain a presence at sea.

“We have three operational commands, eastern, western, and central naval commands and each has been directed to maintain two capital ships which are also intensive,” he said.

Ibrahim said the naval officers were constantly trained and retrained while the commands and officials were being monitored through cameras from the headquarters as an oversight function to facilitate effective operations.

“Anyone found wanting for infractions must be surely punished,” he added.

Speaking on the Very Large Crude Carrier (VLCC) named Heroic Idun that entered Nigerian waters on Aug. 8, 2022, he said the vessel was interrogated to find out if it had NNPC Limited approval or regulatory approval to load.

According to him, they discovered that it did not have approval which made the Nigerian naval officials order the ship to follow them pending when they cleared its presence in Nigeria waterways.

Ibrahim said the vessel sped up instead of turning while the Captain of a Nigerian Naval Ship interrogated the vessel severally which made the ship respond that it had to get in touch with her agent.

He decried the fact that most times the collaborators could pose a problem to their operations because a Nigerian shipping agent told the foreign ship not to answer Nigerian Navy.

The DG said that the vessel never loaded but came to load and was intercepted, arrested, and was still in Equatorial Guinea custody while efforts and talks were ongoing to repatriate it to Nigeria for queries with different charges.

“A decision was being made not to sink her, a large carrier of millions of metric tonnes of crude to avoid collateral damage rather we allowed it to go into the next country for interception.

“The best option we could have is that among the coast of Golf of Guinea countries, we have the under architecture, a collaborative effort among the coastal Naval officers where we exchange information on piracy and vessels.

“So when this vessel continued speeding, we transferred the information to Equatorial Guinea that the vessel refused to stop and was leaving our waterways, then entering theirs because the vessel already reported to International Maritime Bureau that she was under pirate attack.

“We are trying to keep a clean slate of not having a pirate attack on our waters,” he added.

He further explained that the vessel did not load adding that the naval headquarters had frowned and dispelled that information which kept on coming that it loaded three million MT crude.

Speaking on the vessel which was recently destroyed in Warri due to oil theft, he said the decision was taken at the highest and strategic level involving the Chief of Defense Staff.

The DG further said that particular vessel had overtime involved in infractions, adding that any vessel being used to do illegal business could be destroyed lawfully to serve as a deterrent to those involved in illegal activities.

On technology deployment, he said technology was always evolving, adding that the NNPC Limited had a control center that was being operated in a collaborative effort to tackle oil theft.

Ibrahim said the navy would continue to explore options for using technological equipment to monitor oil thefts in collaboration with other security agencies and international partners.

Dr. Benito Eze, Assistant Commandant General, Directorate of Critical National Assets and Infrastructure, NSCDC while speaking on the way forward, said gradually it was going into electronic surveillance to effectively manage the menace.

Speaking from NSCDC’s perspective, he recommended full implementation of the Petroleum Industry Act 2022 to get the involvement of the host communities for the provision of legal governance and fiscal framework.

Dr. Eze equally called for full deregulation of the industry by removal of the petroleum subsidy and payment of statutory percentage to the host communities.