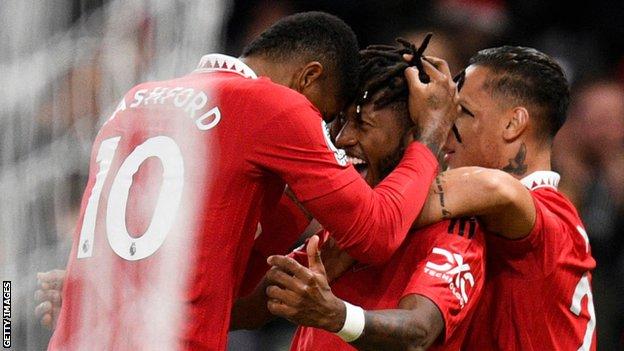 Manchester United produced arguably their finest performance under manager Erik ten Hag as Tottenham were swept aside in the Premier League at Old Trafford.

The scoreline does not do justice to United’s vast superiority as only the brilliance of Spurs keeper Hugo Lloris denied them the truly emphatic victory they deserved.

Lloris made five outstanding saves in the first half alone as United rained in 19 shots on the Spurs goal, which somehow remained intact.

Fred finally broke the deadlock two minutes after the break, his shot carrying a degree of good fortune as Lloris was finally beaten by Ben Davies’ deflection, but it was no more than United deserved for a display high on quality and intensity.

United moved out of sight after 69 minutes when Bruno Fernandes curled a precise right-foot finish beyond the stretching Lloris in front of an ecstatic Stretford End.

Victory keeps Manchester United fifth in the table, eight points behind leaders Arsenal, while Spurs miss the chance to move above Manchester City and stay third.
Manchester United boss Ten Hag understandably looked a satisfied man as he marched off the Old Trafford pitch at the end of a triumph that bore all the hallmarks of what he wants from his new charges.

United were sharper, faster and stronger than Spurs from the first whistle, the only concern being they might have been made to pay for not scoring in an opening 45 minutes which saw Lloris mount a one-man barrier of defiance, with outstanding saves from Luke Shaw and Marcus Rashford. The lively Antony also glanced the outside of the post with a 25-yard effort.

The passing was swift and accurate, with Fred playing a key role alongside the steadying influence of Casemiro in midfield.

And Fernandes showed some of the qualities that made him such a resounding success when he first joined United, the manner in which he steered his finish past Lloris for United’s crucial second a sign of his restored confidence.

If Ten Hag has a complaint, and there will not be many, it will be that a two-goal victory margin in no way reflects just how much better United were than a mediocre Spurs.

When the season started, especially after defeats at home by Brighton and the 4-0 debacle at Brentford, a top-four place in the Premier League would have been a welcome target. If United maintain this target it is well within their compass.
(BBC)