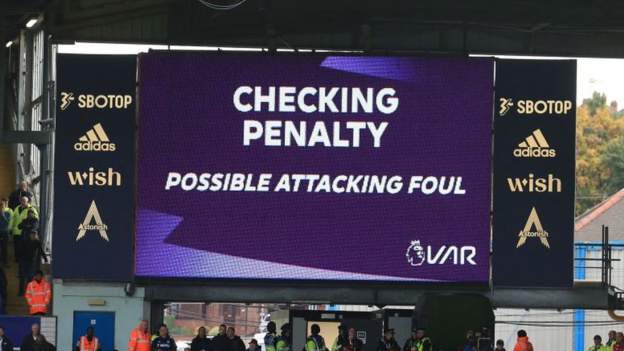 West Ham’s Michail Antonio says VAR has “made refereeing worse” as referees now have “something to fall back on”.

The Jamaica striker referenced the standard of officiating in Liverpool’s 1-0 win over Manchester City on Sunday.

He also complained about refereeing in the Hammers’ draw at Southampton, after which his manager David Moyes said the VAR “needs to go to Specsavers”.

“Consistency is what you want,” Antonio told The Footballer’s Football Podcast, with Newcastle striker Callum Wilson.

Antonio says Romain Perraud’s opening goal in their 1-1 draw should not have stood as the referee Peter Bankes accidentally blocked Jarrod Bowen’s path to the ball, while claiming Kyle Walker-Peters had committed a foul throw in the build-up – but a VAR check allowed the goal to stand.

Officials said it was a foul throw and the rules also state a referee cannot stop a game unless the ball actually hits him.

Antonio added: “I honestly feel VAR’s made the refereeing worse, because they have something to fall back on. They go, ‘alright, if I get the decision wrong, VAR will get the decision right’.

“It gives them the comfort of, ‘I can leave it to VAR and if they mess it up, they’re in more trouble than I am because they’re looking at a video, whereas I’m watching it live’.”

This season has already seen a number of controversial VAR and refereeing decisions.

Earlier this month Tottenham manager Antonio Conte suggested refereeing and VAR in England is not at the required level.

In September, the PGMOL effectively accepted controversial VAR decisions made at Chelsea and Newcastle were wrong, while this month VAR decisions surrounding the handball rule dominated a weekend’s action.

However, as the discussion around the abuse of referees in grassroots football has also been high on the recent agenda, some have criticized negative media punditry around officials at the top of the sport as a contributing factor to behavior at lower levels.

A study by data specialists Nielsen Gracenote found that by the end of September, Premier League referees on average had showed fewer red cards than other major European leagues.

Referees in England were also found to have awarded far fewer fouls (1,350) than other leagues.

Premier League clubs were informed of match officials maintaining a higher threshold regarding contact at the start of the season in order to make the game flow, a point made by video referee Mike Dean earlier this season.

In August, he told the Daily Mail that “referees are under orders this season to let games flow as freely and legally as possible and that cannot happen when they’re blowing for free-kicks all the time”.

Dean said: “Innocuous stoppages prevent fans from seeing a free-flowing game of top-flight football. We’re applying a higher threshold for fouls. The players, managers and clubs know about this approach, too. They all had this info shared before the season’s start and have taken to it well.”

Wilson, who felt he should have been awarded a penalty after a challenge by Raphael Varane in Sunday’s goalless draw against Manchester United, added: “One of the United players said to me, ‘what’s happened to the standard of referees in this country?’ That’s from a foreign player, saying that to me.

“I got wiped out, the defenders on their team are saying that should have been a penalty. I’m thinking, so, I get taken out, I don’t even get up and start appealing now, because I’m just fed up of like going mad at the referees.

“If the ref’s missed it, I’m thinking VAR’s going to step in and do their job. I’m waiting for the ball to go out of play and then I say, ‘what you saying ref?’ He’s like, ‘it’s never a penalty’.

‘Klopp’s red card should be rescinded’
Liverpool manager Jurgen Klopp was sent off late in their game after berating a referee’s assistant when a foul was not given for a challenge on Mohamed Salah.

He apologized for his reaction in his post-match comments and was charged by the Football Association on Tuesday.

The incident came on a weekend where Merseyside Youth League games were postponed amid ongoing issues with referee abuse.

Following Sunday’s incident, a referees’ charity called for an inquiry into the touchline behavior of managers, with Newcastle manager Eddie Howe and Everton boss Frank Lampard saying managers have a “responsibility” to behave.

West Ham boss Moyes defended Klopp and said: “We all have great respect for referees. I hope they will understand that for 90 minutes we can lose our heads a little bit.”

Leeds boss Jesse Marsch and Arsenal’s Mikel Arteta similarly tackled the subject at their news conferences on Wednesday. Both admitted they could become heated on the touchline but agreed they needed to improve and stressed the need to respect referees.

Antonio said Klopp’s “embarrassing” red card should be “rescinded” and said he understood the German’s reaction.

“The Liverpool game was a wrestling match,” he added. “The fouls I was seeing on the pitch and the referee was just waving it on, I couldn’t believe it.

“There were so many situations where it should have been fouls, Klopp’s not getting the fouls, loses his mind, shouts at the linesman because it’s right in front of the linesman’s face and then they send him off.

“At the end of the day, if you’re doing your job right, he doesn’t react that way and he doesn’t get sent off. This is a massive game in the season, you can’t mess it up that way.”

In the first half, Manchester City had a Phil Foden goal that would have put his side ahead ruled out by VAR for an Erling Haaland foul on Fabinho.

Speaking after the game, City boss Pep Guardiola said the referee had told his assistant and Klopp that “he was not going to make fouls unless it was clear”.

“All the game it was ‘play on’ and ‘play on’ – except the goal we scored,” said Guardiola, adding that his team did not lose the game due to the decision.

Klopp said he spoke to referee Anthony Taylor after the match, adding: “The whole game led to that a little bit. It was a very, very intense game with a lot of decisions we didn’t understand on both sides.

“This for me was like the one drop that made the bucket overflow. I’m not happy with my reaction but that’s the way it was and everybody saw it.”
(BBC)