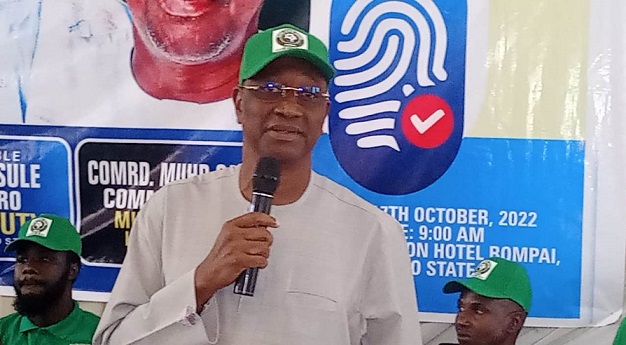 Kano State Commissioner for Information, Malam Muhammad Garba has said that with the level of consolidation of most of the elective positions in the state, what the ruling All Progressives Congress (APC) needs is to further sensitize voters on the importance of exercising their franchise comes 2023.

The Director of Special Duties, Ministry of Information, Sani Abba Yola in a statement, Monday, said Garba spoke at a one-day sensitization seminar organized by Kano State Social Media Forum on the “Role of Social Media Towards Success of Nigeria’s General Election.”

He stated that very few states in the federation this far retain their elective positions that included members of the National Assembly, state legislators, and chairmen of local government councils.

The Commissioner pointed out that data based on the recent statistics published by the Independent National Electoral Commission (INEC), women and youth form the largest group of registered voters in the country and therefore have a critical role to play in making the right choice by effective application of technology in communication to propagate and influence the public.

He said the social media space, which is gradually undermining the conventional media, and called on influencers to get more educated, receive training, and retraining so that they play the expected role in sensitizing the public on the activities of the government at all levels.

Garba who is also the spokesperson of Gawuna/ Garo Campaign Council noted that the APC has an array of candidates vying for various positions, particularly the gubernatorial and deputy gubernatorial candidates who are not comparable to other candidates in the two major political parties in terms of experience, exposure and human relations.

In his remark, the Chairman of the forum, Tijjani Sani Amasco said the seminar was organized to sensitize members on the importance of publicizing the activities of the government.

He expressed satisfaction with the level of support they enjoyed from the government and called for consideration of their educated members in terms of employment opportunities in state service.

The seminar featured presentations from communication scholars that included “Importance of Social Media Towards the Success of General Election” by Dr. Nura Ibrahim Head of Department, Information Media Studies, Bayero University, Kano; “Effective Use of Social Media to Secure Facebook Account” by A’isha Abdulhameed of Facebook Inc., among others.

When Kano Social Media Influencers Get Sensitized For Elections Reportage