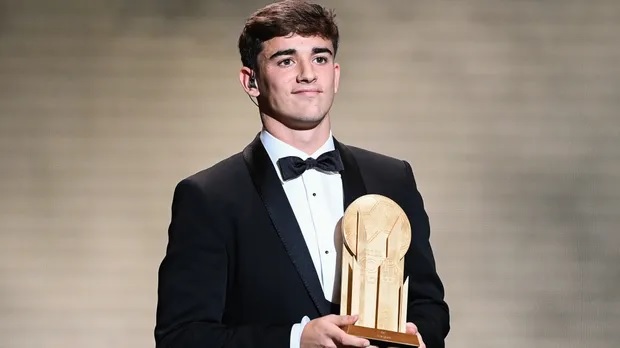 Bayern Munich’s Jamal Musiala finished third in the Kopa Trophy rankings but is being tipped to win the Ballon d’Or in the future by Alphonso Davies.

The 19-year-old finished third in the ranking for the Kopa Trophy at the Ballon d’Or awards behind Real Madrid’s Eduardo Camavinga and Barcelona midfielder Gavi.

Musiala scored eight times and contributed eight assists for Bayern on their way to the Bundesliga title last season and the Bavarian giants aren’t too happy at seeing him miss out to Gavi.

“They may have denied you of your Kopa Trophy, but they won’t deny you of your future Ballon d’Or,” Davies wrote on Twitter, along with pictures of the two players together in action for Bayern.

Coach Julian Nagelsmann has also questioned the decision. “In my opinion, both Jamal Musiala and Jude Bellingham played a better season than the winner,” he told reporters. “But Gavi is an outstanding player and I’m happy for him too.”

This is not the first time Bayern have been left feeling aggrieved at the Ballon d’Or awards. Former striker Robert Lewandowski looked set to win the 2020 edition after a phenomenal season but then saw the awards cancelled because of the pandemic.
Musiala will have a point to prove when the Bavarian giants take on Augsburg in the German Cup on Wednesday and then head to Hoffenheim on Saturday in the Bundesliga.
(Goal)