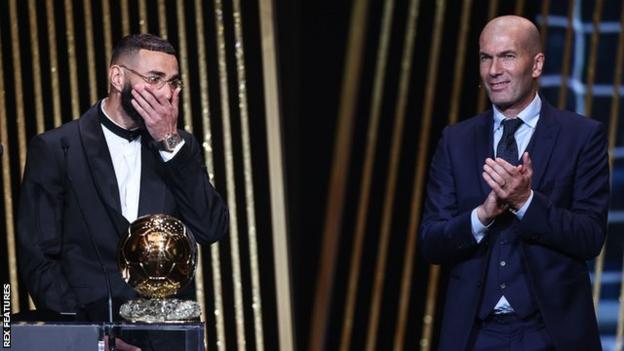 Real Madrid and France forward Karim Benzema has won the Ballon d’Or – awarded to the best footballer of the year – for the first time.

Lionel Messi (seven) and Cristiano Ronaldo (five) had won the award on 12 of the previous 13 occasions.

Bayern Munich’s Sadio Mane, who was at Liverpool in 2021-22, was second ahead of Manchester City’s Kevin de Bruyne.

Premier League champions Manchester City, who had six nominees at the ceremony, were awarded Club of the Year ahead of Liverpool.

The Ballon d’Or is awarded to the best footballer of the year, based on performance over the 2021-22 season.

Benzema is the first Frenchman to win the prestigious award since Zinedine Zidane in 1998. Zidane was at the event to present his countryman with the prize.

“This prize in front of me makes me really proud,” said Benzema. “When I was small, it was a childhood dream, I never gave up. Anything is possible.

“I’m really proud of my journey here. It wasn’t easy, it was a difficult time for my family as well.”

Benzema was the overwhelming favourite to win this year’s award.

His 44 goals included a hat-trick in 17 second-half minutes against Paris Saint-Germain in the Champions League, and another away to Chelsea in the quarter-final first leg.

He also scored three more goals over two legs of the semi-final against Manchester City.

The 34-year-old, who has been at Real Madrid since 2009, is expected to play a key role for France at the World Cup in Qatar which starts on 20 November.

The Ballon d’Or is voted for by 100 journalists from around the world.

Warm reception for Haller
Borussia Dortmund’s former West Ham striker Sebastien Haller, who has recently undergone chemotherapy for a testicular tumour, received warm applause from the audience when he walked on stage to present the Yashin Trophy to Real Madrid’s Thibaut Courtois for best goalkeeper.

The Kopa Trophy, awarded to the best performing player under the age of 21, went to Barcelona and Spain midfielder Gavi, who turned 18 in August.

Barcelona’s Robert Lewandowski won the Gerd Muller Trophy awarded to the best striker after scoring 57 goals for Bayern Munich and Poland in 2021-22.

The inaugural Socrates Award, a humanitarian prize, went to Mane for his charity work.

Five-time winner Ronaldo ranked 20th
Messi and Ronaldo have dominated the award in recent years, apart from in 2018 when Croatia midfielder Luka Modric won it.

However, he was not nominated this time after an underwhelming first season at Paris St-Germain.

Manchester United’s Ronaldo, who last won it in 2017, was placed 20th of the 30 players nominated, the Portuguese’s lowest Ballon d’Or ranking since 2005.