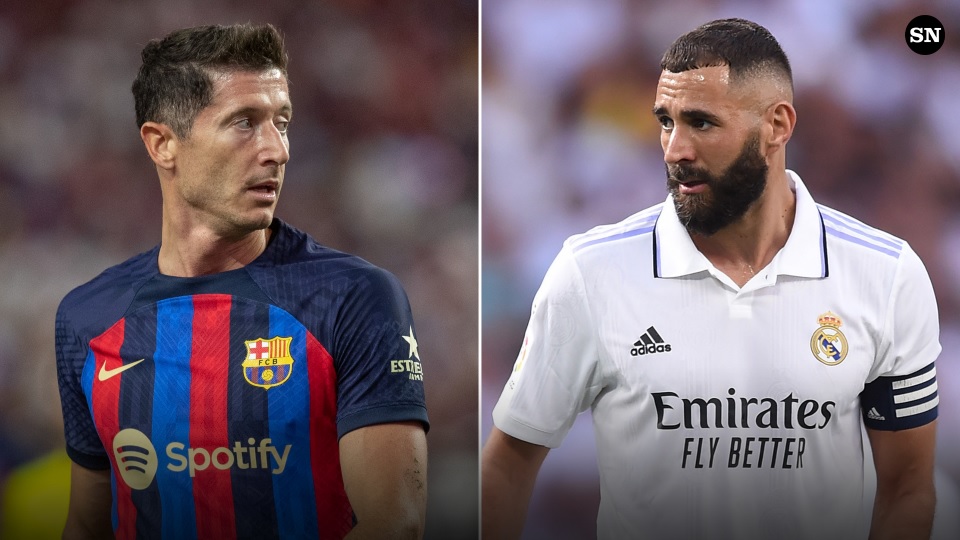 As Karim Benzema went on a goalscoring flurry that helped Real Madrid to a Champions League and La Liga double last season, rivals Barcelona were putting their own plans in place to fight firepower with firepower, prolific forward with prolific forward.

Benzema netted 44 times in 46 appearances in all competitions at a rate of 0.96 goals per game to make himself the frontrunner for this year’s Ballon d’Or.

So Barcelona moved for another of this generation’s most renowned number nines in Robert Lewandowski, a player who reached half a century of goals in a Bayern Munich shirt last term at a rate of 1.09 per game.

For the first time on Sunday, when Real Madrid host Barcelona at the Bernabeu, Benzema and Lewandowski look set to lead the line against each other in El Clasico.

The unbeaten rivals sit level at the summit of La Liga, with Barcelona top on goal difference and 34-year-old Lewandowksi leading the scoring charts with nine goals in eight games.

“Lewandowski just does something to the team that they didn’t have. Apart from scoring goals and being in the box most of the time, he is very important – his movement, how he talks to players, how he tells them what space to occupy.

“He is basically for 90 minutes helping players, moving and creating spaces and telling players where they have to be and what they have to do. His influence is massive, not only because of the goals.”

Barcelona may be on the verge of exiting the Champions League at the group stages, but in Spain’s top flight they have conceded only once and Poland international Lewandowski has benefited from manager Xavi’s more direct approach and the supply from wingers such as Ousmane Dembele and Raphinha.

“They are very good at the offensive transitions, the counter-attacks, putting crosses into the box. Now they have a real finisher with Lewandowksi,” says Ferrer, who leads La Liga TV’s tactical analysis and will be covering the game in Madrid.

“In midfield they don’t spend as much time as they did, so they are pretty direct. Direct doesn’t mean long balls, but Gavi and Pedri getting the ball and straight away looking forward instead of sideways. They have become more vertical, more direct.”

Carlo Ancelotti’s Real were cantering towards the title when they lost 4-0 to a resurgent Barcelona in this fixture last season, without talisman Benzema.

“It was a disaster,” says Ferrer. “They changed their tactics and they changed everything. I don’t think that will happen this season.”

Two of Barcelona’s goals were scored by Pierre-Emerick Aubameyang during his brief stint at the club – before moving to Chelsea once he was effectively replaced by Lewandowski in the summer.

“Aubameyang is a great player in terms of finishing – he is always in the box,” says Ferrer. “But Lewandowski does more. He is able to drop to the midfield and create spaces, to link with players, hold the ball with his body.

“He can do more than just finish; he is more influential in more parts of the game than Aubameyang. He is in that sense more of a complete striker and he is perfect for Barcelona.”

Benzema returned after the rout by Barcelona last season, which was more a dent to Real’s pride than their position, to play a key role in their domestic and Champions League success.

This campaign also began with the Frenchman scoring in the Uefa Super Cup final win and become the club’s second highest all-time scorer, behind Cristiano Ronaldo, but things have since stalled for 34-year-old Benzema because of injury.

The captain missed two league games, including the Madrid derby against Atletico, with a thigh problem, then picked up a knock that ruled him out of Real’s victory over Getafe last week.

Benzema has scored three times in five La Liga games this term but, while his goalscoring exploits are the headline in the clamour for him to claim a maiden Ballon d’Or, he offers an all-round package.

Despite playing fewer games than Lewandowski, he has created more chances in La Liga (13 to 12) and is averaging 2.3 more touches in the opposition box per 90 minutes.

“Lewandowski has a lot of good things, mainly finishing, but all the other movements he does, he does without the ball,” says Ferrer.

“Benzema can score goals, but when he drops, when he links with midfielders, when he drops to the left to link with Vinicius Jr, he is very technical with the ball at his feet. He can create by himself.

“That is the main difference. With the ball, Benzema can do more things possibly than Lewandowski. Without the ball, Lewandowski is possibly better.”

Benzema’s influence on the squad is vital and he has facilitated the progress of some of the club’s young stars, such as Vinicius, Rodrygo and Federico Valverde, as well as France midfielders Eduardo Camavinga and Aurelien Tchouameni.

“Karim has something peculiar,” says Ferrer. “The past two or three seasons he was the best player on the pitch, but he showed two huge players how to grow – one before the other, which is Vinicius Jr and Rodrygo.

“This season didn’t start as expected – everyone expected him to be fighting with Lewandowski in terms of the Pichichi (awarded to La Liga’s top goalscorer). At the moment he is too far from him.

“I am sure he will bounce back. The past few seasons Benzema has been possibly the best striker in Europe.”