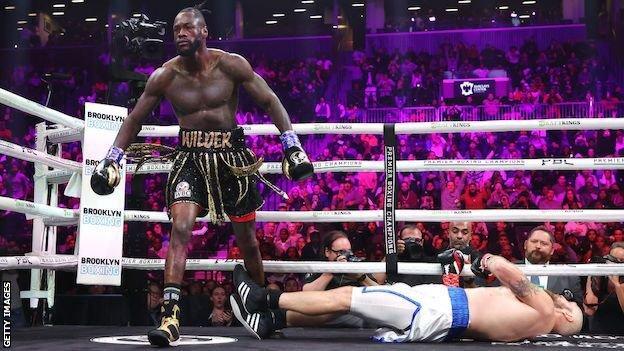 Former heavyweight world champion Deontay Wilder knocked out Robert Helenius in the first round as the ‘Bronze Bomber’ made a winning return to boxing in Brooklyn, New York.

The American, 36, was stepping into the ring for the first time since his second successive knockout defeat by Tyson Fury last October.

He hit Finnish opponent Helenius flush in the face from his famous right hand with seconds left in the opening round.

“It was a great night,” said Wilder.

“I had to take my time. I was making him reach. I wanted to be mobile, agile and hostile. I set him up, allowed him to reach and then when he reached, I attacked.”

He added: “We wanted to make this fun again. You can do this so long it can be a job, just something you are doing. We made it fun. It paid off big time.”

Victory over Helenius, his former sparring partner, at Barclays Center improved Wilder’s record to 43-2 with one draw and 42 knockouts.

The back-to-back defeats by Fury were the first of Wilder’s previously unblemished career and stripped him of the WBC title he had held since 2015, and he had seriously considered retirement in the months afterwards.

Next up, he could face fellow American and former world champion Andy Ruiz Jr or Ukraine’s Oleksandr Usyk, while he also wants to fight Britain’s Anthony Joshua believing it would be “the number one fight in the world”.

“Who’s next? I’m down for whatever,” Wilder said. “Andy Ruiz, Usyk or whatever. I’m back. The excitement is back in the heavyweight division.”
(BBC)