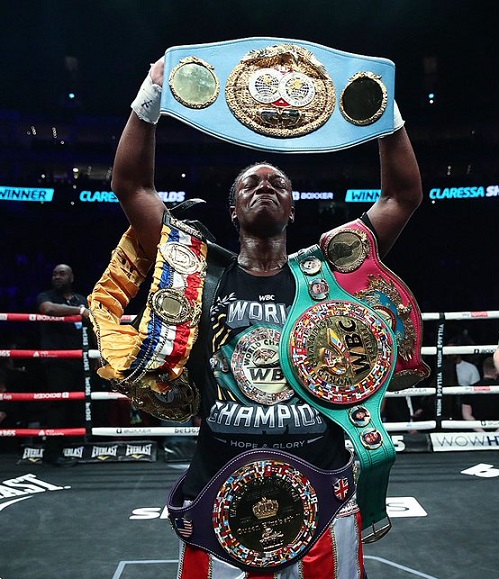 October 15 was indeed a great night for boxing. As expected the greatest night in female boxing happened despite the postponement.

She has been crowned undisputed middleweight champion again after ripping the WBO belt from Savannah Marshall with a unanimous decision win, all three judges scored it 96-94, 96-94, and 97-93 to Shields.

She showcased scorching speed and supreme skills. With rapid-fire combination to shed early blood on the face of Marshall, who responded immediately by backing the American into the corner with her sheer power.

Deomtay Wilder is back strong and vicious. He knocked Robert Helenius unconscious with one of his trademark right hands late in the first round of his comeback bout from his own devastating defeat to Tyson Fury 53 weeks earlier in Las Vegas. Helenius rushed forward, face-first, as Wilder backed toward a neutral corner and paid the ultimate price, as Wilder drilled him with a right hand that knocked Helenius flat on his back.

The official time of the stoppage was 2:57 of the first round. In just the third punch Wilder landed Saturday night emphatically ended his scheduled 12-round fight versus Helenius.  Wilder joined the few that knocked the Finish champ. France’s Johann Duhaupas knocked out Helenius in the sixth round of their April 2016 bout in Helsinki, Finland. American Gerald Washington then knocked out Helenius in the eighth round in July 2019 at The Armory in Minneapolis.

This is not the first time Deontay will knockout boxers. Before Helenius, he knocked out Artur Szpilka, Bermane Stiverne, Luis Ortiz and Dominic Breazeale at Barclays Center. The Stiverne and Breazeale knockouts also came in the first round. Deontay is back and ready for victories. He has been calling Anthony Joshua for a while. Will he get the fight?  Only time will tell.

In the lightweight, Davin Haney’s speed, length, and boxing IQ were too much for Kambosos to overcome. What’s more, Haney, perhaps mindful of some of his critics who think he plays it too safe inside the ring, dished out even more punishment the second time around, repeatedly landing hard right hands that had Kambosos drenched in blood by the end of the fight.

Going by the scorecards alone, Haney won in an even more lopsided fashion against Australia’s Kambosos than in their first fight in July. Back then, two judges scored the bout 116-112 for Haney, while the other had it 118-110. Haney’s dominance in the first fight seemingly made any rematch redundant but Kambosos had a right to invoke one, which he quickly did.

Strikes and University Education in Nigeria: Retrogression or Progression?