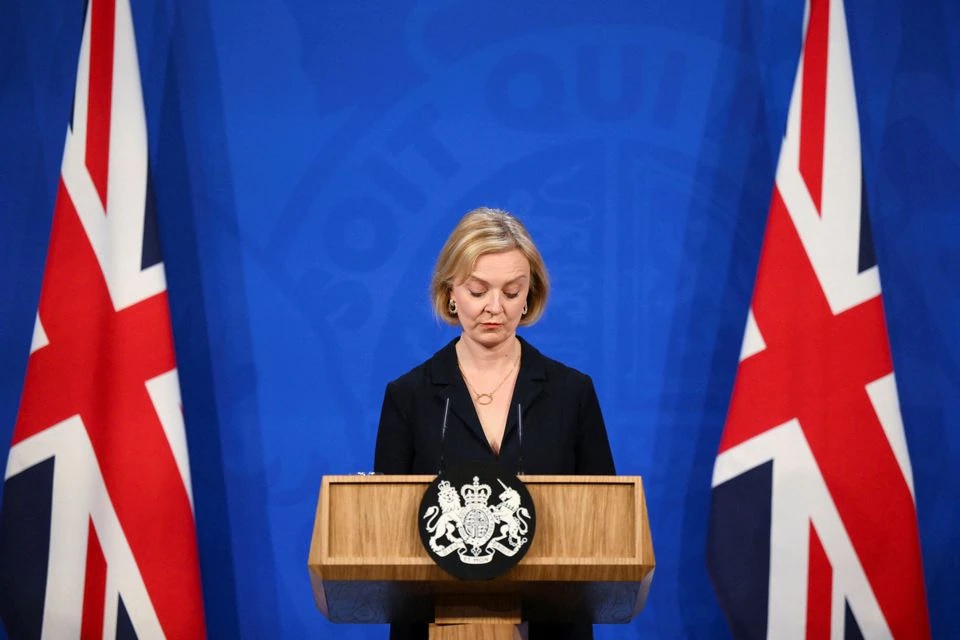 British Prime Minister Liz Truss fired her finance minister Kwasi Kwarteng and scrapped parts of their unpopular economic package on Friday in a desperate bid for political survival less than 40 days into her premiership.

With financial markets in turmoil, a chastened Truss said she accepted her government’s plans for unfunded tax cuts had gone “further and faster” than investors were expecting.

“I have acted decisively today because my priority is ensuring our country’s economic stability,” she told a brief news conference in Downing Street. “I want to be honest, this is difficult. But we will get through this storm.”

The pound and British government bond prices tumbled after she spoke, with economists and investors saying her reversal of 20 billion pounds ($22 billion) of tax cuts was not yet enough to restore calm.

Britain is engulfed in a political crisis akin to the industrial battles of the 1970s, the sterling crash of the early 1990s and the chaos that followed Brexit. Since it voted to leave the European Union in 2016 it has lost three prime ministers and its reputation as a predictable member of the global economic order.

“This marks the first time in decades – since at least the 90s – that the financial markets have forced the government of a big developed economy with its own central bank to capitulate on core fiscal ambitions,” analysts at consultancy Evercore said.

Earlier Truss fired her finance minister and close friend, Kwarteng, after he rushed back to London overnight from IMF meetings in Washington where Britain’s chaotic recent management of its economy was a focal point.

To replace him, she appointed Jeremy Hunt, a former foreign and health secretary who had backed her rival Rishi Sunak in this summer’s race to become Conservative Party leader. He is the fourth finance minister in as many months in Britain, where millions are facing a cost of living crisis.

Kwarteng becomes Britain’s shortest serving finance minister except for a predecessor who died suddenly in office in 1970. “You have asked me to stand aside as your Chancellor. I have accepted,” he wrote in his resignation letter to Truss.

Truss’s own position is now in jeopardy.

She won the Conservative Party leadership last month by promising vast tax cuts and deregulation that she said would shock the economy out of years of stagnant growth. Kwarteng’s Sept. 23 fiscal announcement aimed to deliver that vision.

But the backlash from markets was so ferocious that the Bank of England had to intervene to prevent pension funds being caught up in the chaos, as borrowing and mortgage costs surged.

Yields on the long-dated bonds which bore the brunt of the market turmoil are now within less than half a percentage point of the 20-year highs they struck on Wednesday.

Compounding the market pressures, polls show support for the Conservative Party has collapsed, fuelling panic in Britain’s dominant political party and a hunt to find a way to force Truss out of office.

“She’s toast,” one party lawmaker said.
Having triggered the market rout, Truss runs the risk of bringing the government down if she cannot find a package of public spending cuts and tax rises that will appease investors and get through a vote in parliament.

Hunt will deliver a new budget plan on Oct. 31, giving him two weeks to come up with a solution.

The search for savings will be made harder by the fact that successive Conservative governments have been cutting departmental budgets for years.

Discipline within her party has meanwhile all but broken down, fractured by infighting as it struggled first to agree a way to leave the EU and then how to navigate the COVID-19 pandemic and rebuild the economy.

“The party loves the idea of principles and conviction politicians, but staying in power is everything,” one party insider told Reuters. “Ruthless can also be popular.”

One lawmaker, describing the situation as a “mess”, said Truss could survive but was “badly wounded” and risked alienating the right of the party which elected her.

Christopher Chope, a veteran Conservative lawmaker and Truss supporter, said the party was now a laughing stock. “I thought she was made of sterner stuff,” he told Times Radio.

Underlining how far Britain’s reputation for sound economic management and institutional stability had fallen, a meeting of G7 finance ministers on Wednesday focused on Britain, and not the usual source of concern, Italy, a source said.

In Washington, Kwarteng was also criticised by the head of the International Monetary Fund. He was fired minutes after arriving in Downing Street via a flight back to London that was carried live by television news channels.

FIGHTING FOR SURVIVAL
Another Conservative lawmaker, who asked not to be named, said Truss’s economic policy had caused so much damage that investors may now demand even deeper cuts to rebuild confidence.

“The markets have lost trust in the Conservative Party – and who can blame them?” said the lawmaker, who had backed Sunak for the leadership.

Economists estimate the government needs to find around 60 billion pounds through tax rises and spending cuts.

So far Truss has reversed course on two parts of her fiscal plan – the move to scrap the 45% top rate of income tax and a decision to hold corporation tax at 19% instead of letting it rise to 25% as planned by her predecessor Boris Johnson. Together the two changes will provide around 20 billion pounds for public finances.

A slump in the bond market late in the day suggested that would not be enough to appease investors. To add to the drama, the Bank of England ended its bond buying in the gilt market on Friday, raising concerns about a further fall next week.