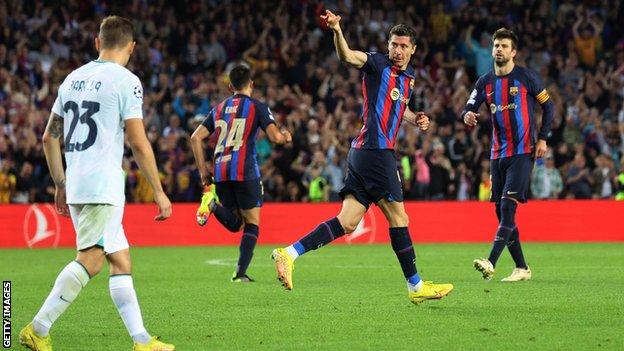 Barcelona are on the brink of a group-stage Champions League exit for the second successive season after being held to a draw by Inter Milan in a breathless and high-octane game at the Nou Camp.

Having been beaten in the San Siro last week, Xavi’s side went into the game knowing that they realistically needed to win to maintain hope of progressing from Group C, with teams on the same points split by their head-to-head record.

The draw leaves Inter – who sit second, behind Bayern Munich who progressed on Wednesday – three points ahead of Barcelona, with both to still play Bayern and Viktoria Plzen.

With Bayern already through, an Inter Milan home win on Wednesday, 26 October (17:45), against bottom side Viktoria Plzen will confirm Barca’s elimination.

Barcelona boss Xavi said: “We’re depending on another team to go through. They are our mistakes, we have to improve them. That’s the reality. The [improvement] process is longer than we thought in Europe.

“There are other competitions, La Liga, the Copa del Rey, the Super Copa. We have to insist, persist and believe.

“When you draw at home with these fans, with this atmosphere, it is my fault. I am angry. My feeling is that this competition has been, and is still being, cruel with us.”
(BBC)