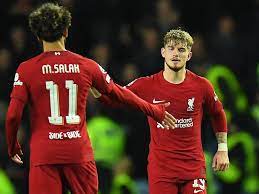 They went into the half-time break level at 1-1 against Rangers at Ibrox, but strolled off at full-time with a 7-1 win under their belts, including a six-minute hat-trick for substitute Mohamed Salah.

“You’ve just witnessed what that Liverpool team can do in the second half,” added the former Leeds defender.

“A performance like that will give you heaps of confidence.

“It looks like Liverpool have got their spark back.”
‘It’s definitely changed the mood’
Sunday sees Liverpool host Manchester City, who they have competed with for the Premier League title in the past four seasons, before games against West Ham and Nottingham Forest.

They will then have a chance to seal their place in the Champions League knockout rounds against Ajax.

Liverpool boss Jurgen Klopp said he knows Sunday’s game will be “different” but hopes the win at Ibrox proves beneficial.

“We usually drink a beer after away games, but it’s been that long, I might actually be drunk after the one.

“When we are on it, we can be a really good team. Unfortunately, we haven’t been like that all season but tonight we really built on the good things from the first half and that’s why the second half is a result of the first half.

“It’s good but we all know who we’re welcoming on Sunday and that will be a different game. But it’s good to be going into that game with this feeling than any other.”

Centre half Virgil van Dijk told BT Sport the result was “great” and “they showed the quality we need for the rest of the season”.

“It is not a bad thing winning 7-1 away,” added the Dutch defender.

“Everyone expected us to win today but we take it a game at a time. Now we approach the big one on Sunday – they are in fantastic form but we will prepare well and be ready.”

‘Firmino was the star player’
Salah’s six-minute treble came after the Egyptian came off the bench following a run of four league games without a goal or assist.

Roberto Firmino also scored a brace, to make it five goals in his last three games.

Woodgate said the latter’s performance was “magnificent” and it was “an absolute pleasure to watch”.

“This has been a really good start to the season for him [Firmino],” said Woodgate.

“The positions he was getting himself into and taking up, as well as his awareness when he receives the ball, is just fantastic.”

Former Liverpool striker Michael Owen, who was a pundit on BT Sport, agreed, saying Firmino was the “star player even though Salah scored three”.

“He [Firmino] is total quality,” said Owen. “He scored two really important goals and the rest is icing on the cake.”

Klopp called Salah “exceptional”, adding: “He’s on fire. He read his position really well and got into the right areas.

“I hope for him everything works well for him from now on. But like us as a team, we will work on it.”

Owen, who scored 158 goals in 297 appearances for Liverpool, said: “A lot of people had him [Firmino] fifth in the pecking order and now ahead of their biggest game, you can’t imagine he isn’t playing. Klopp cant leave him out.”

‘Liverpool needed this, but I still see chinks’
Despite the one-sided nature of the final result the first half was even and Liverpool went a goal down, and could have conceded more if Rangers showed a bit more quality and composure in the final third.

“Liverpool need to get back to being ruthless,” said Owen.

“They are a good team when they play to their strengths but I still see chinks and I am sure Man City will be looking at that.

“Liverpool needed this, their big players scoring and they will be looking forward to the weekend now.”

Former Rangers striker and BT Sport pundit Ally McCoist agreed saying “Manchester City will watch that game and see one or two things they will fancy”.

Ex-Manchester United and Leeds defender and BT Sport pundit Rio Ferdinand added: “People reveling in the mini decline. Opposition fans will be happy – but they aren’t as far away as people are making out.

“The important thing is individual moments where players lacking confidence can go to being back on form again. You can’t beat the feeling – it breeds confidence.

“Salah and Firmino will be bouncing with confidence but still fragile minds if things don’t go their way.

“Conceding first will still be irking the manager though – these things have to change for their season to change.”
(BBC)