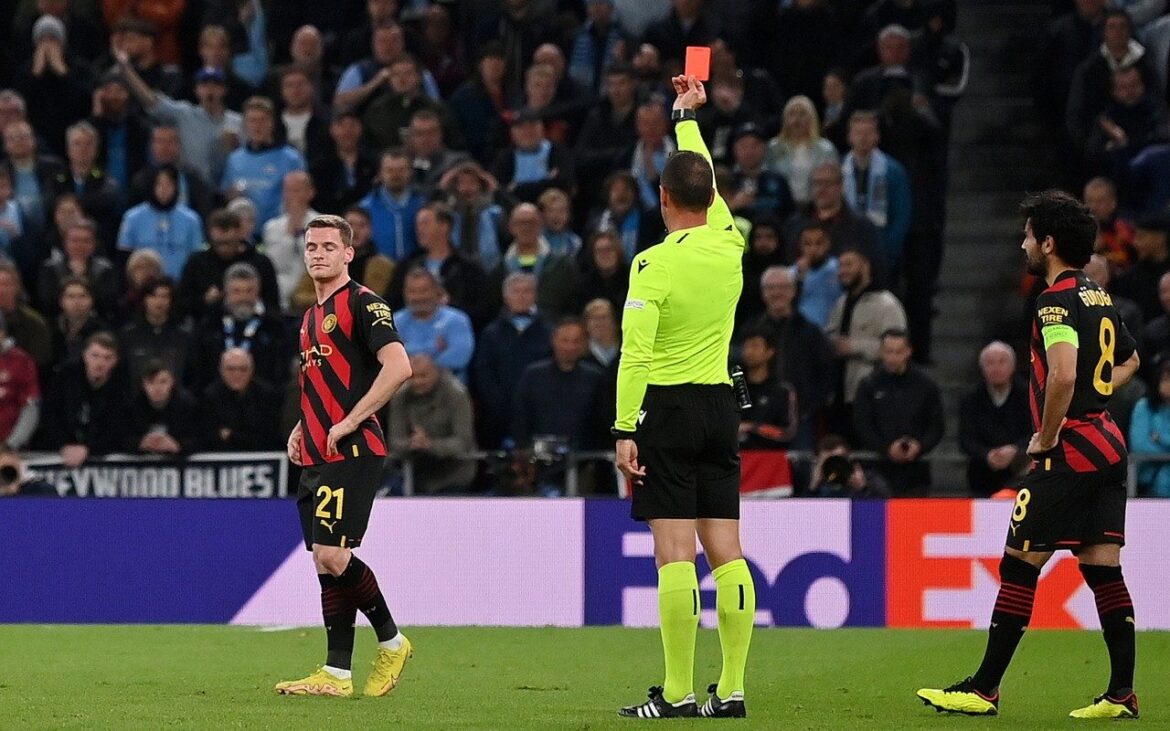 Ten-man Manchester City missed a penalty and had a goal ruled out in a VAR-dominated goalless draw at Copenhagen, but still reached the last 16 of the Champions League.

Pep Guardiola’s side qualified for the knockout phase of the competition after Sevilla failed to beat Borussia Dortmund in Tuesday’s other Group G fixture.

A dramatic opening saw two contentious decisions set the tone for the evening.

Rodri’s superb 25-yard effort for City was ruled out after Riyad Mahrez was penalised for handling, while the visitors benefited by being awarded a penalty when the ball struck home defender Nicolai Boilesen on the arm as he competed for a corner with Manuel Akanji.

But Copenhagen goalkeeper Kamil Grabara brilliantly saved Mahrez’s spot-kick to the delight of a raucous Parken Stadium crowd before Guardiola’s side had Sergio Gomez sent off for a professional foul on 19-year-old forward Hakon Haraldsson five minutes later.

The decision again came after the Portuguese referee Artur Dias was referred to the pitch-side monitor and left the English champions forced to reshape and play the final hour a man down.

Erling Haaland was left on the bench against opponents that had suffered a 5-0 thrashing in Manchester just under a week ago.

Explaining his decision not to play the Norwegian, Guardiola said: “He finished the game against Southampton so, so tired and didn’t recover well.

“Yesterday was not good, today a little better but not perfect so we decided not to take the risk.”

While City saw a run of six consecutive victories come to an end with the loss of their 100% record in the competition, Guardiola appeared satisfied by a point in an encounter they dominated early on.

A youthful Copenhagen side featuring six players aged 20 or under initially struggled to deal with the experience and slick passing on show from the visitors, with Julian Alvarez also close to opening the scoring.

And despite the loss of Gomez just before the half hour mark City still managed almost 70% possession before the break, though the dynamic of the game altered thereafter.

With Bernardo Silva and Phil Foden only introduced late on, rested for City’s impending trip to Anfield to face Liverpool in the Premier League on Sunday (16:30 BST), the visitors were limited to long-range efforts.

Joao Cancelo and Kevin de Bruyne both tested Grabara, while at the other end Lukas Lerager’s dipping shot was the closest Jacob Neestrup’s side came to registering their first goal in the tournament this term.
(BBC)