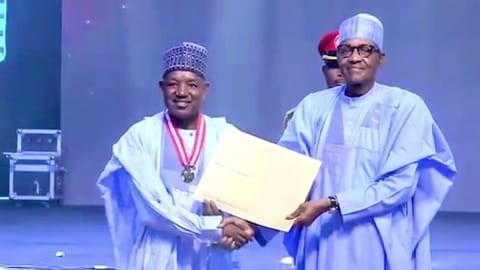 Kebbi State Governor and Chairman of Progressives Governors’ Forum, Senator Abubakar Atiku Bagudu triumphantly received the prestigious award of the Commander of the order of the Niger, CON, in an investiture performed by President Muhammadu Buhari.

Senator Atiku Bagudu led five other distinguished indigenes of Kebbi State to be inducted with the national awards at a grand ceremony this Tuesday at the International Conference Centre, Abuja.

The Kebbi State Chief Executive has excelled in various fields as an astute politician, an icon of unity, a facilitator of industrialization, and an administrative intellectual, and a cradle of agricultural revival in Nigeria which led to food security and rice surplus in the country.

This feat earned Governor Abubakar Atiku Bagudu the honor of being appointed by President Muhammad Buhari as the Chairman, of the Presidential Task Force on Rice and Wheat Production in Nigeria, and Vice Chairman to Mr. President National Food Security Council.

In addition, Senator Atiku Bagudu has brought rapid industrialization to Kebbi State as is evident in the establishment of modern world-class rice mills and the largest tomato processing factory on the African continent in the State by Private investors coupled with regular electricity supply.

The Governor is also a great achiever in rural and urban transformation with an emphasis on intra and intercity road construction as well as infrastructural development.

Governor Atiku Bagudu and the other recipients were beautifully decorated with National awards by President Muhammadu Buhari in an epoch-making event in Abuja.