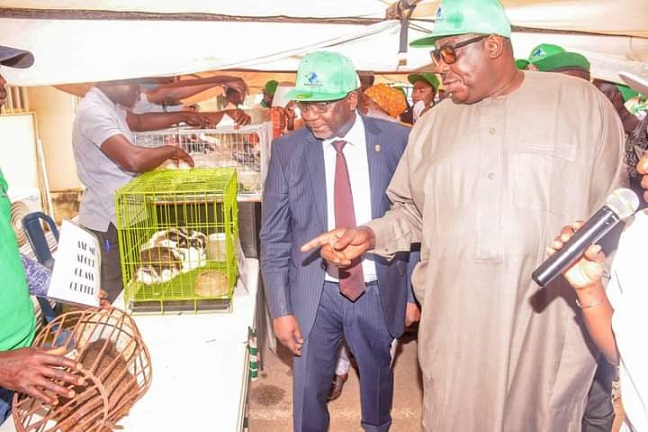 The Federal Ministry of Agriculture and Rural Development, (FMARD) and its stakeholders joined the rest of the World to commemorate World Farm Animals Day and World Animal Day while advocating for climate-smart agriculture.

The commemoration which was held recently at the Ministry’s premises in Abuja had the theme “Good Animal Husbandry Practice Is Climate Smart.”

A statement by Mrs. Eremah Anthonia, Associate Chief Information Officer (ACIO) for the Director of Information the Minister of State for Agriculture and Rural Development, Hon. Mustapha Baba Shehuri avered that the commemoration of World Animal Day reminded all to examine animal husbandry practices in relation to the environment.

“In the ever-changing climate situations and with the view to adapt and mitigate its effects, we must strive for productivity, the profitability of production, and the associated businesses.”

According to the statement, the Minister pointed out that the climate-smart agriculture strategies which included sustainable livestock production systems were to address environmental issues while ensuring improved productivity, enhanced resilience, and reduced greenhouse gas emissions amongst others.

He further revealed that World Animal Day was officially adopted in May 1931, by the International Animal Protection Congress in Florence, Italy, where October 4th was declared as the day for global Commemoration of World Animal Day, while World Farm Animals Day was declared on October 2nd, 1983.

In her remarks, the Director of the Animal Husbandry Services Department, Mrs. Winnie Solarin noted that the mission of World Animal Day was to raise awareness, sustainability, and profitability of animal production as well as animal protein in nutrition for healthy living.

The Director emphasized that the mission was in tandem with the mandate of the Department of Animal Husbandry (DAHS) and FMARD in general, stressing that World Animal Day embraces all animals including domestic animals.

She noted the unique concerns of each, in every country but with emphasis on animals for slaughter as meat as well as those kept for other socio-economic purposes such as farming and transport.

“In many countries, World Animal Day is now being celebrated by various organizations and government bodies. These include the Society for the Protection of Animal Rights in Egypt (SPARE), Animals Lebanon and Animal Naturalist Colombia, the Himalayan Animal Rescue Trust (HART), and the Sudanese Animal Care & Environmental Organization to mention but a few”.

Earlier, in his goodwill message, the Registrar of Nigeria Institute of Animal Science (NIAS) Prof. Eustace A. Iyayi said that animals play a vital role in Agriculture and other sectors hence generating income for the economy.

He reiterated that this is the first time Nigeria is celebrating World Animal day with other countries, pointing out that, what we are celebrating today is to create awareness and sustain the economy.

The highlight of the event was the visitation of the Hon. Minister of State, FMARD, Mustapha Baba Shehuri, the Permanent Secretary, FMARD, Dr. Ernest Umakhihe, and other officials to various animal value chains at the exhibition stand, the statement added.