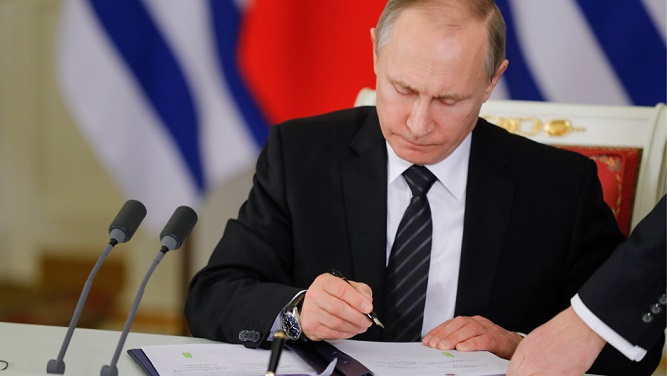 Russia’s President Vladimir Putin has signed the final papers to annex four regions of Ukraine – even as his military suffered further setbacks.

The Luhansk, Donetsk, Zaporizhzhia and Kherson regions are “accepted into the Russian Federation” the documents say.

But in two of those areas – Luhansk and Kherson – Ukraine said it has been retaking more villages.

Last Friday, the Russian leader held a grand ceremony in the Kremlin, where he signed agreements with the Moscow-installed leaders of the four regions.

The move followed self-proclaimed referendums in the areas, denounced as a “sham” by the West.

But on the ground there appears to be a different reality, with Ukrainian forces making gains in both the south and the east.

Serhiy Haidai, Ukrainian governor of Luhansk, told the BBC on Wednesday that six villages in the region had been recaptured.

That followed a series of gains in Kherson the previous day, including the strategically key village of Davydiv Brid.

Meanwhile, the southern city of Zaporizhzhia was rocked by a series of huge explosions an hour or so before dawn.

Local authorities say seven Russian missiles hit residential buildings and that people are under the rubble. There has been no information on casualties so far.

The BBC’s Paul Adams, who is in the city, says rescue workers are combing through the shattered remains of an elegant five storey apartment building in the middle of the city.

Kremlin spokesman Dmitry Peskov said Russia would retake any territory that had been lost to Ukrainian forces.

Facing questions over the recent losses, he told reporters: “There is no contradiction here. They will be with Russia forever, they will be returned.”

In a speech to teachers on Russian teachers’ day, Mr Putin said he would “calmly develop” the annexed territories.

But Andrey Kartopolov, the chairman of the State Duma defence committee, told state media that Russia needed to stop lying about what was happening on the battlefield, saying that Russians were not stupid.

Russia is still working to mobilize reservists, after Mr Putin announced a call-up last month of 300,000 people who had completed compulsory military service.

But Mr Putin has rowed back on which groups will be affected, after strong opposition and protests in Russia against the move.

He has signed a decree exempting several categories of students, including first-time students at accredited institutions, and certain types of postgraduate students – such as those in the field of science.

In another move, President Putin has signed a decree to formalize Russia’s seizure of the nuclear power plant in one of the annexed regions – Zaporizhzhia – which has been occupied by Russian troops since the early days of the war.

Russia says the plant – Europe’s largest nuclear facility – will be operated by a new company, but Ukraine’s nuclear operator has dismissed the move as “worthless”.

Rafael Grossi, the head of the UN’s nuclear watchdog, the IAEA, has said he will hold consultations with the two sides following the development.

He is heading to Kyiv and then Moscow, seeking to establish a protection zone around the plant, which is situated near the front line of fighting.
(BBC)