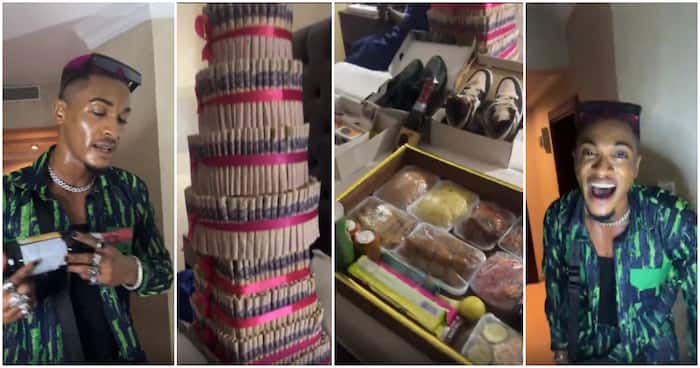 Fans of the former BBNaija Level Up housemate, Groovy treat him to a birthday surprise with loads of gift items including a paid trip to Kigali.

The reality star marks his 27th birthday yesterday 5th October2 2022 following the conclusion of the Season 7 show that witnessed Phyna as the winner.

The fans of Groovy treated him to loads of gift items as a token of appreciation as he marks his 27th birthday.

The gifts include an iPhone 14, three giant money cakes, shoes, foreign currencies, a trip to an African country, and many others.

In other news Once again, Netizens have proved that the internet never forgets as Netizens take turns to shade Former Big Brother Naija Season 6 housemate, Tega Dominic for advising parents on how to train their kids.

“Dear mothers, teach your boy and girl child about loyalty as they grow, teach them about relationships, it will open a million doors where money can’t”.

Reacting, while some Netizens told her she is not in the position to advice mothers because she failed to prove she is a true mother, others agreed with her.
(Gistlover)

WHO: India-made cough syrups may be tied to 66 deaths in Gambia